Have you ever tasted Cowboy Candy?  If you haven't and can find someone who makes it, you are in for a treat!  We had never even heard of it until my friend, Mariann, brought us a jar and suggested we try it on top of crackers spread with cream cheese.  We devoured those tasty little morsels in record time!  And then we shamelessly hinted we would love more.  She brought us another jar.  And then last week she asked if I would like jalapeños to make my own.  She brought me 1 1/2 lbs which her husband had sliced for me before he sent them--what a guy! She also brought the recipe.  I cut the recipe which calls for 3 lb. in half and made 4 (1/2 pints) of this delicious little appetizer!
Another friend called Saturday to ask if I would like some jalapeños.  Of course, I replied with an enthusiastic "yes"!  Before my introduction to cowboy candy, I would have had no idea what to do with so many.  But now I am accumulating all I can get.  Today I made more candy with the 3+ lbs Sharon gave me and the 1/2 lb I already had.
Here's a photo of the treasure before and after I sliced them. 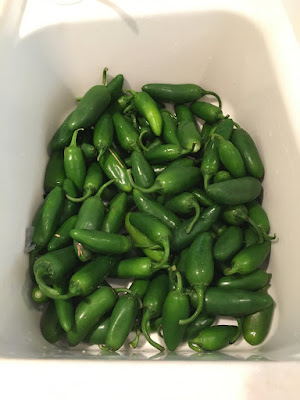 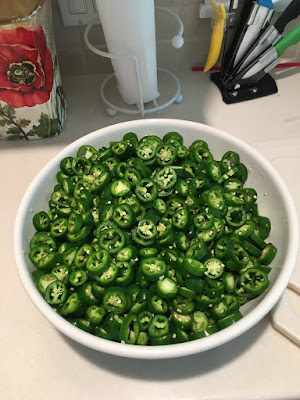 I also added a few little sweet peppers for color. 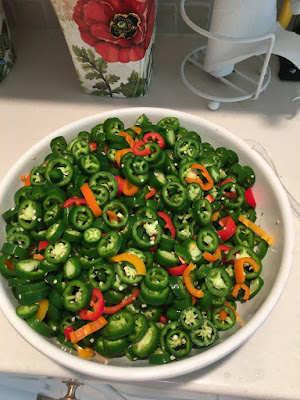 The result of my labor. 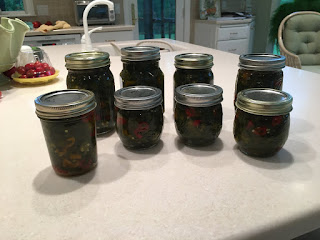 Here's the recipe, if you are tempted to make some on your own.  You can find several recipes online.  This one is the one that Mariann uses.  I don't know where she got it, but I copied the same recipe she brought me from this site: https://www.foodiewithfamily.com/candied-jalapenos/ which has interesting commentary also.