"God's Plans for America Will Not Be Overthrown!" by Dutch Sheets

"God's Plans for America Will Not Be Overthrown!"

We are in the middle of an evil attempt to overthrow the government of the United States of America. This attempt is about so much more than President Trump, but he is currently the focal point of the attack. The enemy has a plan to rule over this nation and President Trump stands in his way. Satan has stirred up the Left to ramrod their plan forward, and they have truly pulled out all the stops to make that happen.

This is not a new thing. Psalm 2 begins by saying, "How dare the nations plan a rebellion. Their foolish plots are futile! Look at how the power brokers of the world rise up to hold their summit as the rulers scheme and confer together against Yahweh and His Anointed King, saying, 'Let's come together and break away from the Creator. Once and for all let's cast off these controlling chains of God and His Christ!'" (verses 1-3, TPT)

As for this nation right now, there are demonic agendas at every level across every sector. We are seeing this in Government, Media, Business, Religion, Arts and Entertainment, and Education conspiring together to ideologically change America. If they succeed, the America that was, will be no more.

We must stand firm and believe God will intervene and all their wicked plans fail, as we continue to intercede and decree. We must stand and declare, "The evil spiritual forces that are trying to rule America now will be overruled by the authority of King Jesus!" 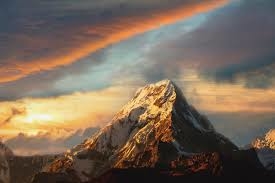 Psalm 2 continues, and verses 4-6 tell us, "God-Enthroned merely laughs at them; the Sovereign One mocks their madness! Then with the fierceness of His fiery anger He settles the issue and terrifies them to death with these words: 'I Myself have poured out My King on Zion, My holy mountain.'" (Photo via Pixabay)

God sent His Son to deal with rebellious hearts plotting schemes against Him, such as attempting to overthrow the very plan of God for America. Jesus replied to the Father in verses 7-9, "I will reveal the eternal purpose of God. For He has decreed over Me, 'You are My favored Son. And as Your Father I have crowned You as My King Eternal... Ask Me to give You the nations and I will do it, and they shall become Your legacy. Your domain will stretch to the ends of the earth. And You will shepherd them with unlimited authority, crushing their rebellion as an iron rod smashes jars of clay!'"

Some prophetic voices have said this battle will look like the book of Esther. Haman, who thought he was being exalted, was instead hanged on his own gallows. Others have said it would be as Lazarus in the grave or Christ in the tomb. As in all these cases, the enemy will think he has won. It will look like it's over. Then suddenly, the victory will be seen. That's exactly what has happened so far. The media has prematurely declared their choice for president. While those on the Left rejoice, we are still waiting for the legal results of this election. We still have time to see the rod of Christ's authority fall and crush the rebellion at the gate.

Psalm 2 concludes in verses 10 and 11 with an opportunity for repentance: "Listen to Me, all you rebel-kings and all you upstart judges of the earth. Learn your lesson while there's still time. Serve and worship the awe-inspiring God. Recognize His greatness and bow before Him, trembling with reverence in His presence."

Give Him 15 Minutes in Prayer:

• Say, "How dare those with a godless, humanistic plan for America enact a rebellion against God and this nation? Their foolish plots are futile! Look at how the power brokers of the world rise up as rulers and scheme and confer together against Yahweh and His Anointed. ALL of your plans will be exposed and brought to justice!"

• Command every hidden scheme intended to enact a coup against the United States of America to be revealed! We want all the details to get in the light—what was done, how, and by whom.

• Decree, "The iron rod of Christ's authority will smash all of Hell's rebellious plots against us, even those not yet carried out!"

• Pray that all those without Christ that are conspiring against us will now see Jesus and will fall on their faces in awe and repentance.May they acknowledge His greatness before it is too late. (Photo via pixy.org)

• Declare, "God's eternal covenant and purpose for America are secure."

A Prayer You Can Pray:

Father, look on the rebellious ones attempting to cancel Your covenant with America. They want a godless, humanistic plan for America and have enacted a rebellion against the United States of America. Look at how the power brokers of the world rise up as rulers, and scheme and confer together against You and Your Anointed. They have made a huge mistake! They have plotted against You! We say their foolish plots are futile! ALL of their plans will be exposed and brought to justice!

We release the strategies of Psalm 2 and say, "The strategies of Hell will be crushed with the scepter and the authority of the King of kings and Lord of lords." We declare that all demonic entities that have been in the process of being uprooted will be fully dealt with now. Out with you!

Lord, it is a terrible thing to be confronted by You, the Living God. The brightness of Your glory exposes all the darkness in us and we are undone. Reveal Yourself to these enemies of America. May they fall on their faces in brokenness and humble repentance. Nevertheless, we ask for justice for what they have done. They have put America through so much turmoil, violence, threats, and upheaval. As these wicked ones and their plans are fully exposed, we declare in Jesus' name, "God's eternal covenant and purpose for America is secure!" Amen.

Christ's rod of authority is falling against the coup against America. It will be fully exposed to the Light! Justice will come and America will be saved!