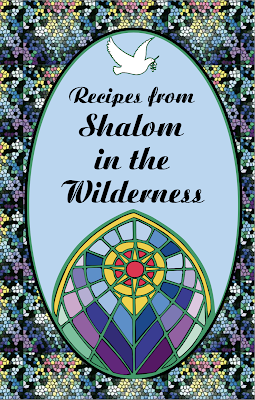 In 2011, I decided to have the recipes I had been posting on this blog made into a cookbook which I entitled, Recipes from Shalom in the Wilderness, to give my children and grandchildren for Christmas.  As I researched I discovered it was much more economical to get a bunch of them than a few so I ordered 200.  I enjoyed giving them to friends, family, guests, anyone who seemed interested until I had depleted my supply.  In 2015, I republished it again under the name The Village Cooks which we used as a fundraiser for Martinsville On The Move.

Well, I was out of cookbooks again, so this time I went back to the original name and ordered 200 more books. They were delivered on Christmas Eve.  This new edition has 50 or more new recipes so it is larger than the other two.  I'm donating 100 of them as a fundraiser for The Woodlands--the park we are developing in Martinsville so all the proceeds from the sale of these will go to The Woodlands.  If you are interested in purchasing one (or more to give as gifts) contact me through the email listed for this blog.  The cost is $15 if the book needs to be mailed, or you can pick one up at Changing Hands Resale Shoppe in Martinsville for $10.

These recipes are either handed down through generations or gleaned from family, friends, or other cookbooks--some I've not seen anywhere else.  As I was telling a friend the other day, there are some recipes in this book for which I would pay $10 each!  So if you are needing some new ones I would be glad to share the book with you.  If you don't want to purchase the book, almost all of the recipes have been posted on this blog over the years--there's just no index. 😫