"Watch What Happens Between China and Russia" Amanda Grace

I find Amanda Grace's prophetic words intriguing, full of mystery and hope.  This one is no exception.

The Point of Boiling Over & a 'Gall of a Deal'

Praise be to the Lord God, El Shaddai, who rules in righteousness, who is long suffering, whose name is above all names, and to His Kingdom there is no end.

The Spirit of the Lord says this day, "My children, there is much 'percolating' happening on the earth. A furious boil has begun in areas of the world, and that boil has approached the point of BOILING OVER," says the Lord of hosts.

The Spirit of the Lord says this day, "A horn shall arise in the midst; they shall attempt to exalt their HORNS," says the Lord of hosts.

"Watch Spain in the midst," says the Lord of hosts.

The Spirit of the Lord says this day, "The Green New Deal shall turn to a gall of a deal, as an attempt to propitiate another tentacle of this deal is CUT OFF, is compromised, and shall indeed infect the other areas of such," says the Lord of hosts.

They Are Casting Lots

"There are those in Congress who are speaking out against the tensions of Russia and China, that blasphemous dragon, and Ukraine. HOWEVER," says the Lord of hosts, "they have had secret meetings by computer with the consulates and advocates and ministers of these leaders, and have secretly struck a deal and are doing such, and opening up avenues of great monetary value, and great weaponry, and GREAT technology in order to make a deal for such.

"For they are CASTING LOTS for Ukraine; the Hamans are casting LOTS for Ukraine, for they have foolishly thought they had the power of others going forth with them—that they have no opposition to such. HOWEVER," says the Lord, "the book of Esther...just (55) watch; just watch for you shall see divine reversals and sudden changes in course that shall begin to lead things in an unexpected direction," says the Lord of hosts.

Eruptions Within and Around

"The explosiveness has just begun, as a string of eruptions shall occur both from within the earth and around the world," says the Lord of hosts.

A Sudden and Sharp Plummet within Canadian Leadership

The Spirit of the Lord says this day, "O CANADA, O CANADA, I THE LORD GOD AM WITH YOU. The wicked leaders of your land are not fighting you but fighting Me and MY PLAN. They are attempting to drain and lynch and blockade the people coming together in one accord, [and] what can be withheld from them," says the Lord of hosts. 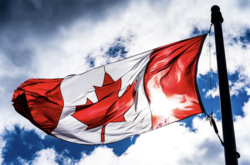 "A VERY SUDDEN AND SHARP PLUMMET within the leadership of Canada shall echo freedom across the land. O Canada, cry out to Me, march forward, put on the whole armor of God and STAND, for the dawn breaking forth of your salvation is at hand."  (Photo via Unsplash)

"My people, under the leadership of Esther and Mordecai, so rose up, so girded their loins and readied themselves under threat of total destruction. And I, the Lord your God, went forth before Esther; I went forth before Mordecai; I went forth and exposed the plot that was birthed from an abuse of power and a corrupted desire to be king and oust who was on the throne."

The Lord of hosts says, "Unholy unions for the kingdom of darkness are taking place. Repent," says the Spirit. "Repent, for your cup of iniquities shall be poured out."

A Major Move Out of DC

The Spirit of the Lord says this day, "[There shall be] a major move OUT of Washington DC, as those are PHYSICALLY MOVED and thrust from this city. Some may 'retire' and some will just FALL as there is a major upheaval preparing to take place. And that layer that has been protecting many shall be cracked and broken up, and that soil tilled, and the roots torn up and removed, twisted right out of position," says the Lord of hosts this day.

"I Am Filling You with Power, Strength and Authority"

The Spirit of the Lord says this day, "I am with you My children, always, even until the end of the age. I the Lord your God am breathing a breath of fresh air into your lives. The enemy has released an attack, a potent one of depression and hopelessness and tormenting thoughts. However, I the Lord God am your shield, your glory and the lifter of your head! Fast and pray and it shall lose its power and retreat," says the Lord of hosts this day.

"The enemy is attempting to weary many through this and tire them out to a point of exhaustion. However, I the Lord God am the giver of life, and I shall refresh and renew and blow that depressive fog from your mind as you continue to PRESS and persevere on such a path.

"The enemy has attempted to slow you down, but just as Elijah was given a special cake to refresh him—that caused him to run faster than a chariot—so I the Lord, in this hour, am refreshing you, My children. I am filling you with My power, strength, authority and sharpness of mind and speech that you shall see things accelerate and burst forth, giving you strength and endurance to run this next leg of your race."

The Spirit of the Lord says this day, "I AM THE GOOD SHEPHERD, and I shall protect and honor such who have gone out into the fields and done the work, who have truly shepherded the sheep—not in a way that alienates the sheep from Me, the Lord your God, but in a way that draws them to Me; for I desire a close communion with My children, and I desire to see them work the harvest [rather] than going around causing division and confusion among the sheep. For those sheep shall be isolated and locked away where they cannot do such harm to the flock and the shepherds.

Shifting Plates Near Russia - an Ayatollah Is About to BLOW

"[There shall be] a shifting of plates near Russia; the ground shall shake beneath them," says the Lord of hosts. "And an Ayatollah is about to BLOW, as prideful men have risen up on their podiums to demonstrate their strength. However, I the Lord of hosts shall send a wind to knock them over." 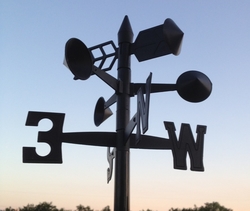 The Spirit of the Lord says this day, "The East Coast governors—watch what happens on that coast; closely watch the timing of what they do," says the Lord of hosts. (Photo via Pxhere)

"The West Coast governor is hanging on by a thread—a frayed, dirty, tarnished thread that is about to snap, and the backlash shall be great," says the Lord of hosts.

"I Am Revealing Mysteries - the Combination Will Be Found"

The Spirit of the Lord says this day, "I AM the God of Abraham, Isaac and Jacob; I change not. I neither sleep nor slumber, and I reveal the mysteries of the Kingdom to those with a listening ear for such. Open your ears to hear the word of the Lord, for in this hour I am revealing mysteries to My children who are seeking and pressing, and they shall crack codes; they shall see patterns; they shall make connections that others did not see; and this shall refine them and propel them forward in their purpose for MY Kingdom," says the Lord of hosts.

"The combination will be found," says the Lord. "Highly sensitive documents at bases and forts—the combination shall be found and the findings shall be shared, as even the Pentagon will think 'the sky is falling' with what will happen.

Watch for a Comet

"I Am letting Air Out of Trudeau's Balloon"

"In this hour there shall be a squeeze and a sudden release, as I am letting the air out of Trudeau's balloon as well," says the Lord of hosts.

Be Firmly Rooted: Exposure in China

"Now is the time to know your roots. Be firmly rooted; do not get weary in the last leg of this race as there will be much contending. And you, My children, shall contend for the faith and be victorious in such, as you submit yourselves to the sharpening that you shall need to be a weapon and an instrument for My glory, as you shall speak, filled with the Holy Spirit in this hour.

"The process shall not be sped up but shall complete its full work and intention as their skirts are being lifted above their heads and their nakedness exposed. [There will be] such a scandal and such shame for that leader of China that he shall become a laughing stock to his own people, a spectacle before the world, as his plans will not only flop but fall. I shall make a show of Him," says the Lord.

"Just watch what happens between China and Russia as their power shall wane, as well, in a series of events. I the Lord shall shake these paper-doll leaders in this hour as they have overstepped, and now I the Lord shall trample their plans."

Thus says the Lord of hosts, the King of kings, in Jesus' name, amen.