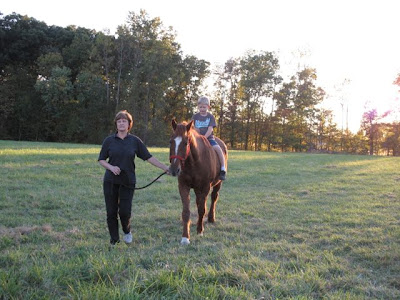 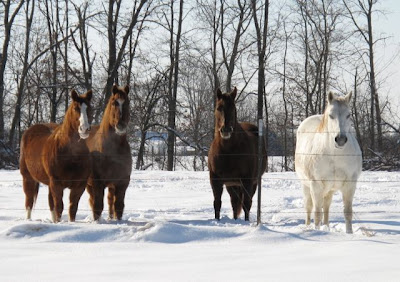 Our beautiful horse, Jobee, (second from left in the above picture) is going to be put down today.  Country Guy found him yesterday evening standing in the pasture holding up one of his front legs.  Jobee wouldn't even try to walk.  He called the vet who could not tell what was wrong but said he might have an abscess.  She thought the horse shoer might be able to tell but since it was late we would have to wait till morning to contact him.  Country Guy went out to check on Jobee early this morning and found him lying on the ground unable to get up.  He called the vet to come put him down so I went out to say good-bye.  I am so sad.  In fact I am crying as I write this.
Jobee is 33 years old.  He is the first horse I ever owned and the one I love the most because he has such a unique personality.  He whinnies when I come to see him, especially if he thinks I'm bringing apples.  It always seems as if he is trying to talk to me.
He was a wonderfully trained roping horse that we bought when we lived in Nebraska.  Dave Arrington, who boarded him for us, used Jobee to teach others when they wanted to learn how to rope.
After we bought him, Dave found a beautiful, used Syd Hill Australian saddle for me.  Every time I approached Jobee with the saddle he gave me a look that seemed to say, "You're not putting that sissy saddle on me again, are you?"
He was a wonderful horse!  He always came when I called him.  He was very calm and well mannered.  He rarely ever shied in new circumstances, and he had the most beautiful trot.  He looked like the horses used in harness racing.  He always lifted his front legs high and looked so stately.  There was only one thing we discovered Jobee did not like and that was horse carts--and bicycles because their wheels must have reminded him of carts.  We always wondered if someone had tried to hitch him to a cart.  He knew he was meant to be a roping horse not hitched to a cart.
I loved Jobee!
at 9:02:00 AM

I am so sorry! That sounds so sad!!!
Janet

Thanks, Janet. It is amazing how attached one can get to animals isn't it? I suppose part of that has to do with the unconditional love they seem to have for their owners.

Sorry, Mom. I know you loved that horse! I also know that losing a pet is SAD! He was lucky to live many of his 30+ years with you guys who loved him!
Jess

So sorry to hear this. We had a sick horse last night and hope he pulls through today. It is never easy saying goodbye...even to our animals.