The Festivals & Events Action Team which was formed through the MAPPING process sponsored by Martinsville On The Move is busy working on several projects.
Dan Smith has made a new model for us of the proposed amphitheater at the new Linn Park.  We are excited about this model and feel it is close to the final plan.  An idea we are considering is to increase the cupola overhang, lower it a little and then leave the area between the two roofs open instead of having windows to clean.  This would allow for air circulation and light but avoid unnecessary upkeep.
The brick donation fundraiser we began a couple of months ago to pay for building the amphitheater is going well.  For donations of $100, $200, $300 or more, donors receive a 6x6, 6x9 or 9x9 inch brick engraved according to the donor's specifications.  (We welcome your contribution.  The more bricks we have and the more varied the inscriptions, the more interesting it will be to walk on the path and the sooner we can build the amphitheater.  The bricks can say anything as long as it is approved by the committee.  We already have some historical, some memorial, some in honor of, and a couple of Bible verses and wise sayings, so if you would like to help us out while contributing a lasting memory to our brick path please contact me.)
In addition to the funds raised through brick donations, we have received a $20,000 grant from the Linn Foundation and additional business donations so that we are halfway to our goal of raising $75,000 to build the amphitheater.  We had planned to complete fundraising by early spring so that we could begin construction in April, but if the funds are received sooner we will possibly be able to begin this winter before the ground freezes. 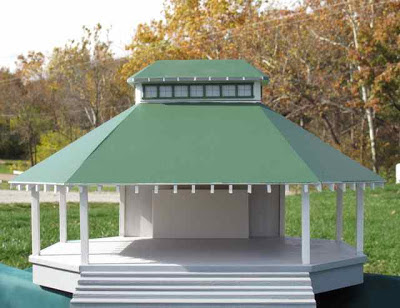 We are also excited about an idea that has evolved from the brick fundraiser.  As we were discussing plans with Randy Netzley, a horticulturalist, to develop a small botanical garden in which to lay the brick path, he mentioned that the nearest botanical garden is in Springfield.  We decided this could be a great opportunity to develop a botanical garden in this area that could be enjoyed by residents of the surrounding communities as well as promote tourism in the county.  We plan to install nameplates to identify all the existing plants and trees in the Linn Park and then intentionally choose plants for the brick garden and additional gardens and landscaping to provide as much diversity in the garden as possible.
Our committee is also working on a new National Road Festival planned for Father's Day weekend which we are very excited about!  We think it will draw people from many miles around because of the theme and the unique program line-up so stay-tuned for more about that in a later post.
Since there are several others projects in progress besides the above mentioned it really does feel as if Martinsville IS on the Move.
at 7:44:00 AM