The Quest for A New Mattress

For several weeks I would wake during the night or early morning with hip or back pain.  My conclusion was that it was time for a new mattress.  Since we were going to Nebraska for our grandson's baptism it seemed a great opportunity to look at mattresses at Nebraska Furniture Mart.  We were not expecting to buy--only lay on a few to try them out.  In the meantime we went to dinner with friends who said someone had told them they had purchased a mattress from Mattress Firm.  The store was on the way to the Furniture Mart so we decided to stop in there on August 29.
After hearing why we had come and finding out we were from Illinois, the salesman assured us they could direct-ship a mattress to our residence.  Since we found one that seemed pretty comfortable, we decided to buy it and not have to go to the trouble of looking elsewhere.  BAD IDEA!
The salesman said we would be contacted in 10-14 days to set up a delivery time.  When this time passed without hearing from anyone I called Mattress Firm.  One of the salesman said that meant 10-14 WORKING DAYS so it would be more like 16-28 calendar days.  Since I had been cleaning, painting the bathroom, etc. I wasn't too upset about the delay, but when 25 days passed without hearing from anyone I called again.  The salesman said he would check and get right back to me.  He didn't, so I called again the next day.  After much checking they discovered a "computer glitch" which I think meant it was never ordered in the first place, so, sorry, but there would be a slight delay.  Someone would call me on October 12 to tell me when the mattress would be delivered.  I was not happy, but I had waited this long, what could I do?  They offered to cancel the order but I said no, I would wait.
Well, guess what!  No one called on Oct. 12 either, so I called again.  They would call me right back, but didn't.  I called the next day.  Same thing.  Then the Lord finally got my attention.  I woke up one morning thinking, "maybe that mattress is not the right one for us since it is so difficult to get and the Lord is trying to let me know that."  (I am never sure whether when difficulties come I am to press through or see it as a sign to go another direction.)  Well, I finally decided to take it as the latter.  I called Mattress Firm and cancelled the order and then spent the rest of the day looking at mattress reviews online.  (Needless to say I would not recommend Mattress Firm.)
I had already checked out reviews of different kinds of mattresses online that's why I wanted to try one out in Nebraska. We had a latex mattress for the first 25-30 years of marriage which we loved but they are difficult to find in stores.  I thought since Nebraska Furniture Mart is so large they might have one to try out but we got side-tracked at Mattress Firm.
Well, after reading reviews on sleeplikethedead.com I was even more convinced I wanted a latex mattress.  They mentioned Flobeds.com.  I went to their website and after reading reviews, decided to order a king deluxe mattress even though we could not try it out.  The Flo Beds website helped me decide what to order and then I called them to talk over the decision.  They suggested firm, xtra firm, super firm layers for Country Guy and medium, firm, xtra firm for me even though I told them I prefer firmer than he does.  The salesman assured me these layers would give us lots of different combinations if we didn't like the original and if those combinations didn't work we could exchange layers. They said they would ship the bed the next day and I would receive it in 4 days.  I did!
After it came Monday I began putting the bed together. That was so much fun!  It only took a couple of hours but could have taken less time if I hadn't been having so much fun watching the pieces "grow.'  It came in 6 boxes because the mattress is built in 6 layers with a topper, and the foundation is made of 6 pieces.  I'm posting pictures.  Each layer of mattress was about the size of a large sofa pillow until the plastic was unwrapped and then it expanded to a 3 inch thick twin sized piece of latex. 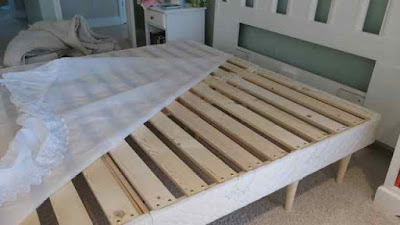 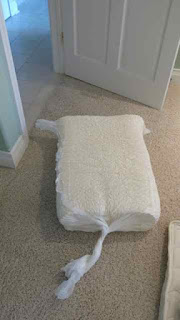 Well, after sleeping on the bed the first night, we decided to switch.  Country Guy loves my combination and I love his.  What a great bed!  We were assured we have 100 days in which we can trade layers to make the bed 'just right' if these don't work out but I think this may be perfect already!
So almost 2 months to the day that we started looking we have a great new bed.  Thank you, Lord!!

( If you decide to get one of these beds after looking at my post be sure to mention our names.  Since their business is built on referrals they will send us a free set of sheets.)