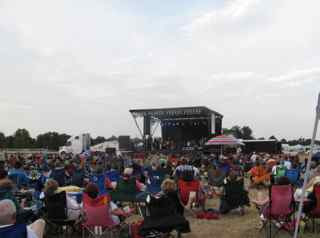 Elevate 2012 is now a thing of the past.  Yesterday we braved temperatures that were almost unbearable (one report said the temp reached 109 degrees) to prepare for Elevate and then to enjoy the concert last night.  I am amazed that an estimated 1000 people braved the heat to hear For King & Country, Josh Wilson, and Kutless.  It was a wonderful concert.  One of the perks of being on the Elevate committee is interacting with the band members and crews.  It is so interesting to hear where they've been and what they are doing.  They were all very gracious and thankful for our efforts to help them enjoy their time with us.
It is always a major production to get ready for the concert.  Several of us worked for 6 or 7 hours on Friday night setting up the stage, preparing food, etc.  Then we all began again at 7:00 on Saturday morning and continued past midnight last night.  We still have several things to pick up and return today.
For each of the concerts --2010, 2011, and 2012--we have rented a state-fair-quality stage that is brought in from Champaign, and set up on the infield of the racetrack on the Martinsville fairgrounds.  The stage comes as a flatbed trailer which is expanded on site.  Lights and speakers are then hung from the frame and a huge sound board is installed to run all the equipment.  This is an amazing process to watch.  It takes a crew of several men a couple of hours to assemble and disassemble. 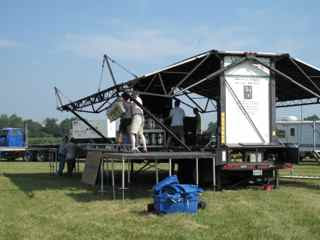 Two large tents--one to be used as a hospitality tent for the bands and the other to sell their merchandise are also erected on the site.