I was feeling a little sad Friday night and yesterday.  I know it is irrational, but I couldn't seem to help myself.  Let me explain.  Last week on Wednesday as I was working on my computer in the living room I happened to catch something move in the corner of my eye.  I glanced out the window and saw two big bucks in the woods at the edge of the yard.  I grabbed my camera and took pictures as I watched them for several minutes.  I snapped the picture below as the largest buck (and I) was about to discover a doe lying in the leaves.  As you can see she looks like a large rock in the left side of the picture.  I wish the picture was a little clearer, but I was shooting the photos through the glass of the window.  You get the idea though.  It was such a blessing to watch this little scene from nature right outside my window.
I continued watching for quite some time and in the process discovered there were actually 4 bucks following her scent. 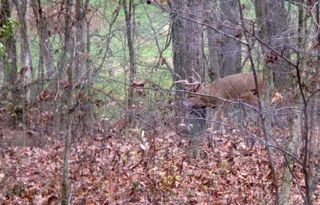 Then on Friday I looked out a window into the front yard and discovered they were back.  I didn't see any does, but I saw the bucks at different intervals as one would walk off into the woods and shortly another would come behind him.
I guess seeing them twice in one week made me feel they felt safe and protected on our property since it is bow hunting season.  And somehow I felt responsible for their security.  Of course I know that's ridiculous because it is a known fact that a buck will follow a doe anywhere at anytime for long distances once he catches her scent, but feelings don't always follow rational thoughts.
Supposedly this time frame we're in right now is the peak of mating season and therefore a great opportunity for hunters to snag some unsuspecting bucks who have their minds on things other than watching out for hunters, so Friday afternoon my brother showed up to go bow hunting.  He has had permission to hunt on our land ever since we've lived here.
In my head I know the deer population needs to be thinned--and when they get in my gardens I even wish I could help with the thinning--but somehow in seeing those beautiful bucks I guess I forgot all the damage they can do.  (In addition to the grazing they have done on my plants and shrubs and the corn and soybeans they have eaten, I have also lost several young trees because they rub their antlers against them until the bark is totally gone.)
Anyway, to my brother's delight, he killed the biggest of the bucks.  When he told me, I'm afraid I didn't share his enthusiasm, and then I was sad for awhile.
I'm pretty much over the sadness now.  I know shotgun season starts next week so someone else probably would have shot him.  I'm glad that if it was going to happen that my brother was the one to do it.  He was so happy!  He said it is the biggest buck he has ever killed with a bow--and he has done a lot of hunting and has many deer head trophies to prove it!
I have to say, though, that I still haven't gotten to the point of enjoying seeing any of God's creatures dead, so when it happens it helps me to spend a little time mourning the loss of their beauty.
at 10:51:00 AM