I have been working practically non-stop on my new cookbook.  I had no idea it would take so much time!  One thing led to another and before I knew it, I had put in many hours for several days straight, typing, reading, re-arranging, proofing etc. Then I had to move everything I had done to a different word processing program because I used Pages and the publishing company wanted it to be in Word.  Each section of the cookbook had to be in a separate document so I cut and pasted to create the required divisions.  Then I realized the way my new computer works--with which I've barely had time to become acquainted--is that every time I tell it to save something in Word, it creates a new document.  As I went back to read the sections several times and made corrections, of course, I told it to save the changes.  What I didn't realize until I had saved several was that it was saving each bunch of changes in a new document!  It became very confusing and time-consuming to discover which was the last document I had saved and to send the others to the trash.
This morning I finally composed an email with all the files attached and pushed the "send" button, so it is now out of my hands.  What a relief!  But a tad bit scary for me, too.  You could say I am somewhat of a perfectionist.  Once I pushed send, I began to have thoughts about whether there was a way I could have made it better.  I do have one more chance to look at the set-up before it is actually published.   Hopefully, I will be so thrilled with the way it looks in print that I will stop second guessing myself.  :o)
I have had lots of encouragement in what to include, and some new additions submitted by my extended family, so it looks as if the count--as best I could tell--is 249 recipes.  When my cousin read about the cookbook on the blog she emailed me to ask if I would add our grandmother's orange bread recipe. I mentioned it to Mom, who had a copy, and then Sandra sent one, too, so I was able to include it.  How fun to have old recipes mixed in with the new!  I was even able to add Meredith's recipe which she contributed under "comments" on the original cookbook post a few days ago.  I am always thrilled to have readers' participation!
After talking with family and friends, I am assuming there may be a few extra copies, so if you are interested in reserving one, let me know.  It looks as if the cookbook will cost less than I had originally thought because I ordered a larger quantity.  I think the price will be around $10 shipped, or about $7-8 if you can pick it up.  I still don't have the final cost yet, and I don't know how much shipping is, so I will let you know when I do.
As I was sitting in the living room yesterday with my computer on my lap, working on the cookbook, I happened to look up.  This is the sight I saw out our front door.  Of course, I had to get my camera.  I have accused the raccoons of tearing up the mulch there, but it looks as if they have had some help. 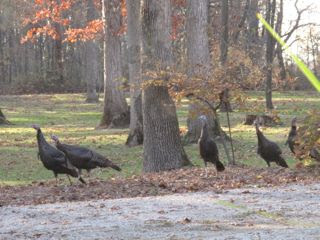