What A Fun Redneck Pool Party!

Our Redneck Pool Party Saturday night was a great success!  We had a little difficulty with the pool,  as you will see from the pictures, but with the help of several different people we managed to keep it in tact till the Party was over!
We heard estimates from different people of 200-400 attendees.  However many were there, it was just the right amount for our first year.  Since we had no idea how many would come, or even for sure what we were doing, we couldn't have handled many more.  Those who came were very appreciative of the work done & loved the fun they had! Starting construction.  As you can see the shape began as a rectangle. 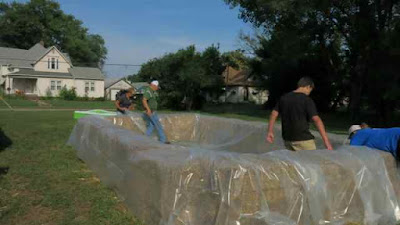 We started with a plastic liner. 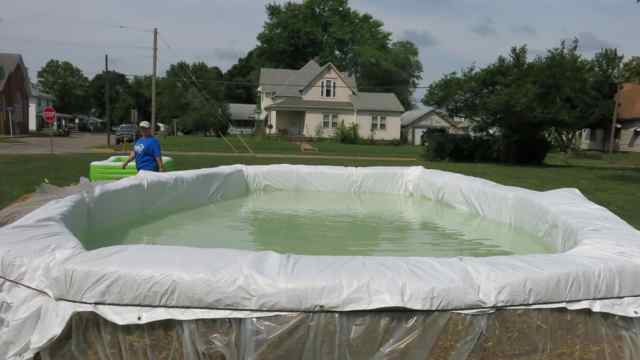 A tarp was placed over the plastic and then the Fire Department filled the pool with their water truck.  This took about 5-10 minutes.  Can you imagine how long it would have taken with a garden hose?
As the water was added the shape of the pool began to change because of the pressure on the bales. 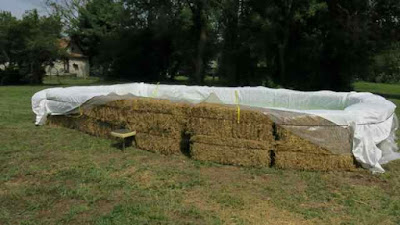 You can see in this photo, the water pulled the plastic and the tarp off one side as the shape of the pool shifted.  At this point we were concerned the pool might not last till the party at began 5:30 but the firemen pumped the water they had just put into the pool into a holding tank and we were able to straighten the bales, add straps around the them and stabilize them enough to pump the water back in.  (We had started with ropes around the bales but they stretched too much to hold the shape.) 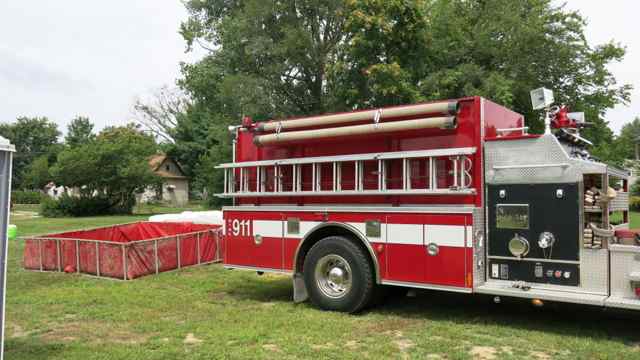 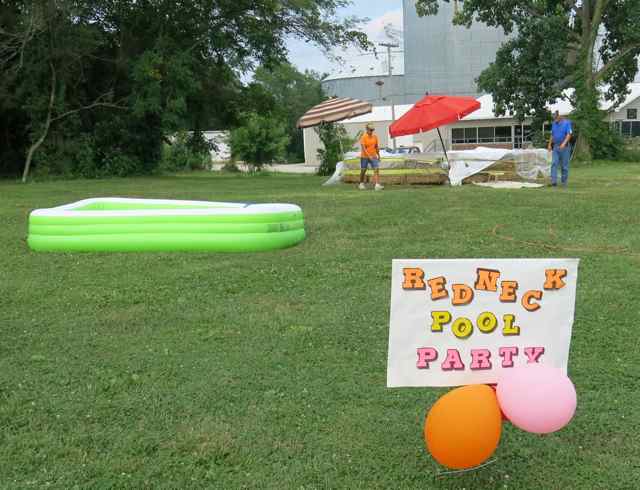 A couple of pool umbrellas were added to enhance the Redneck look.  We were ready to begin 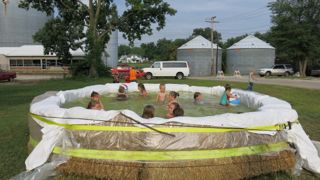 As you can see from this photo the shape of the pool shifted so much it was almost round by the time the kids started arriving.  Amazing!  Obviously next year we will build it round to start with! 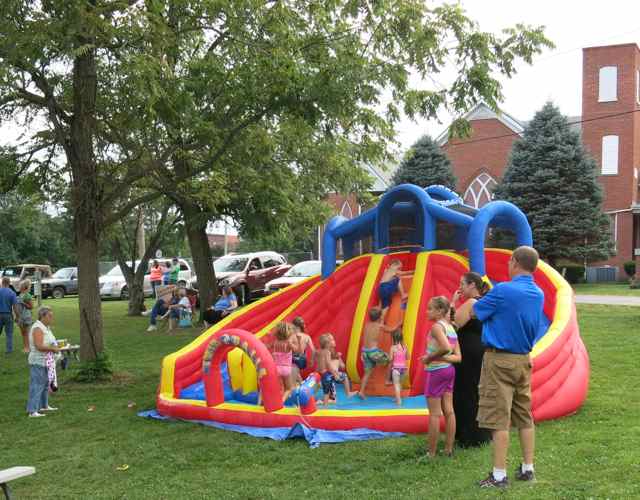 The Herreras brought their water slide which was very popular with the younger kids. 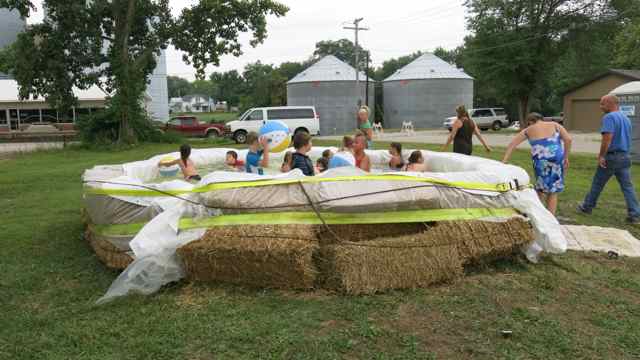 And then the pressure on the west side of the pool started causing the bales to collapse. 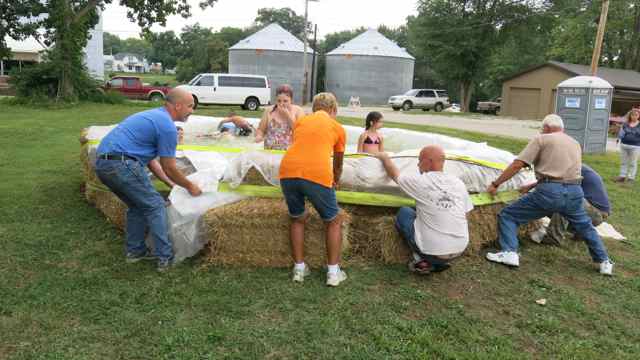 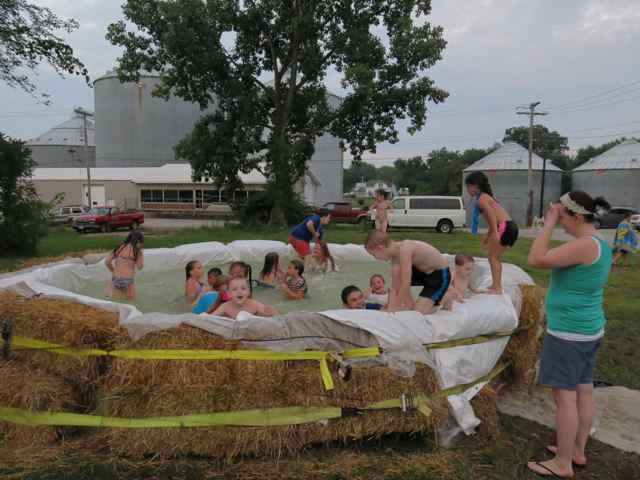 Bystanders went to work shoring up the support and the fun continued. 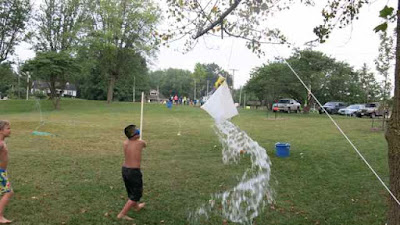 The pinaqua was very popular. 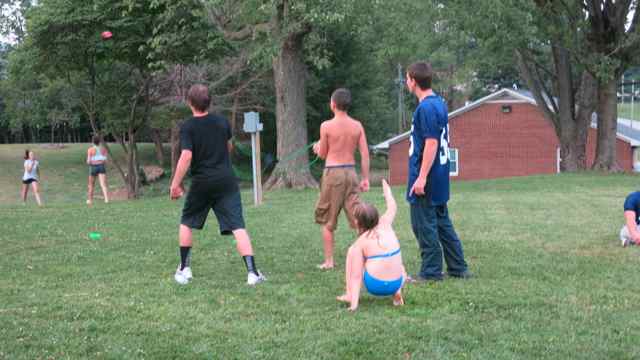 As was the water balloon launcher--especially with the high school kids. 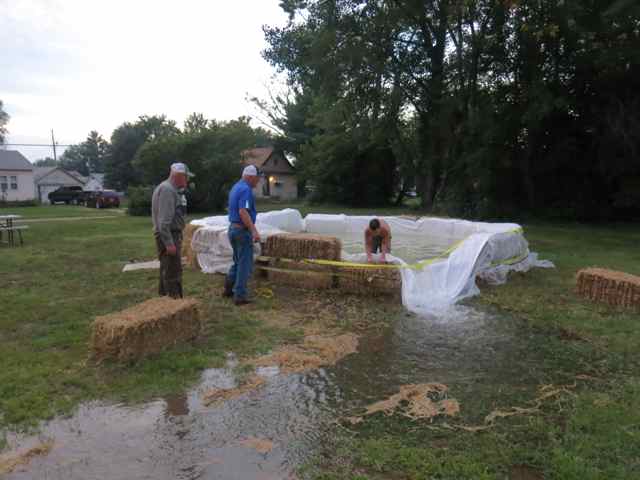 At 8:00 p.m. we had to stop the games and clear the kids out of the pool so we could empty it and set up for the movie in the amphitheater at 8:30.  There were a few tears as kids realized the water fun was over.
One little boy told the ladies at the concession stand "That is an awesome pool!"  Obviously, the whole party was a huge success!  We have already had people asking if we will do it again next year.  The answer is "yes' but next year we will be a lot smarter on how to build the pool.
I must say that those of us constructing it may have had more fun than the participants, though!
at 8:14:00 AM

That’s just an awesome bash. I had such fun time watching all these pictures here. At the local Seattle venues we also attended our team building employee bash that was also a fun event. Everyone had great time playing outdoor games and the food that was served was also fantastic.