I spent much of last week working on a photo book of our summer trip to Eastern Europe.  I try to do this after every significant trip we take, especially if grandchildren are involved.  Since I had taken so many photos (nearly 2000) I was really dragging my feet to get started on this one.
To add a little interest, I decided to try a different photo book company.  Previously, I had used Snapfish and had no complaints but thought using a new company might get me motivated.  After researching reviews I decided to try My Publisher, which had the highest rating on one of the websites.  It also had downloadable software which meant I wouldn't have to be online to work on the book.  This seemed like it would be a timesaver since we often drive long distances so I could work on it in the car.
I first tried this going to Nebraska in July but the uploaded photos were so small I was having trouble seeing them.  I soon got very frustrated since I had to add them to a page and then remove the photo if it wasn't what I thought.  I even called the company to find out if there was something I was missing.  They said that unfortunately their software didn't support enlargements. Because of the high ratings and the fact that I had already uploaded photos and completed a few pages, I pressed on.  Using my new and old computers I would choose an enlarged view of the photo on one and add it to the book on the other.  This wasn't ideal but I was making progress so I continued.  But then the software started freezing up.  Needless to say, I was not happy with My Publisher.  In fact I was so unhappy that even though I had completed several pages I decided to look for another photo book company.  I found Mixbook through reviews online and started over.
I lovedMixbook!  Hovering over the uploaded photos caused them to enlarge so I could see what I was choosing.  The cropping tool was fantastic!  I love taking several photos of wonderful views when one can't capture it and then putting them together as a panorama.  The tools provided on Mixbook made this easy and fun.  There was even a tool to change resolution, saturation and contrast on the photos.  This was particularly useful in the panorama scenes to get the skies to blend.  Here are screenshots of three of the panoramas in the book.  The first one spreads across the top of one page and is a composite of 3 photos; the next is a two page spread--the reason the center looks grayed--and is a composite of 5 photos, and the last is a full page spread of the interior of the Great Synagogue in Budapest.  It is a composit of 3 photos. 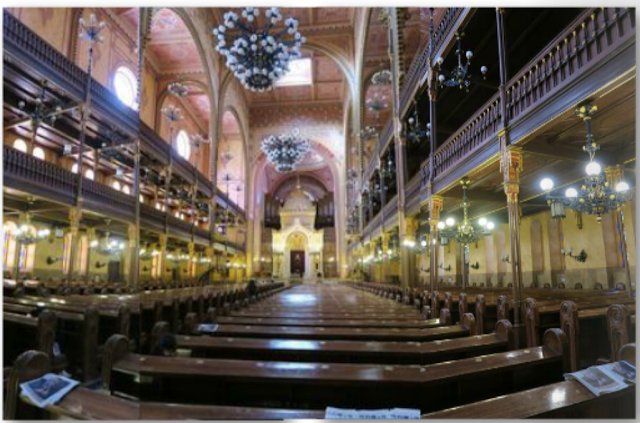 The finished book contains a total of 113 pages.  Mixbook had a 50% off coupon so I ordered two books Saturday and received a confirmation saying they would be delivered Sept. 6.  Yesterday they came.  I also ordered a book on Sunday for a friend who was on the trip thinking I was having it sent to her.  I paid $2 extra to have it delivered to her by Sept. 2.  Through a mixup on my part it came to me instead and was delivered on Wed.  I was very amazed that it came so quickly!  Published and delivered in 4 days!  The photos were printed with crisp bright colors on heavy paper and seem to be brighter than those in the Snapfish books.
I am very pleased with Mixbook and will be using it for future photo books.
at 5:43:00 AM