We had such a good time last night!

One of the companies our business works with invited Country Guy and me to go to the 6th game of the World Series.  We have never been that interested in baseball, but thought it would be fun to experience a game of the Series at least once, so we enthusiastically said "yes".  On Wednesday we headed to the game with Sue, who works for the company and her husband, Dave, who was in my class in high school.  We were looking forward to spending time together, when Sue received a text from her son saying the game was postponed to Thursday because of rain.  We turned around, came home and made plans to try again yesterday.   Sue had made reservations for dinner and for us to stay in a nearby hotel because the game didn't start till 7:00 so they knew it would be too late to drive home when it was over.  Little did they know!  She had to remake the reservations on the way home and even change the hotel we were to stay in.
We began our journey again yesterday afternoon.  The weather was perfect on Thursday even though it was a little chilly.  We checked into the hotel and then went to Carmine's to see if we could have dinner earlier than our reservation.  It was delicious.  As we were going out the door of the restaurant, a young man came running at top speed at us and through the door, bumping Sue & me, but saying "Excuse me" as he went.  Then there came two or three others chasing him, and then several police cars pulled up with sirens and lights.  We don't know what happened, but it was a memorable experience!
We then went, carrying our winter coats and blankets, and settled into a packed stadium to watch our first major league baseball game in person in our entire married life.  And what a game!  Of course, since the game was in St. Louis, we were routing for the Cardinals, who weren't playing all that well for the first few innings.  But then it began to get really interesting.  I felt almost as if I was at a close football game.  The crowd became tense, and excited and then practically hysterical as Texas would score, and then the Cardinals would score.  We were behind several points for awhile, but at the end of the 9th inning the teams were tied.  Both scored 2 points in the 10th inning to tie again and so the game went into the 11th inning.  I predicted when they tied in the 9th inning that they would win in the 11th and that they would win the 7th game tonight, to achieve their 11th World Series Championship in this year of 2011.  Now I have something invested, so, of course, I will be watching tonight to see if it happens. 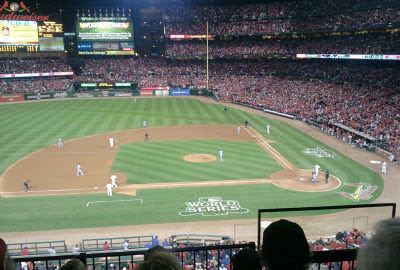 Our seats were wonderful.  Here is a picture of the field from where we were sitting. 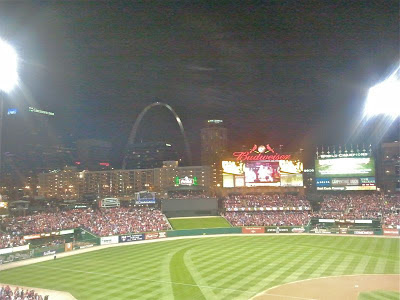 See the arch in the background?   The tall building next to it is the Millennium Hotel where we stayed after the game.  Do you also see the arch mowed into the infield?  I wonder how they did that!
The game was over after 11:30!  I could never have imagined spending 5 hours at a baseball game and having so much fun!  What a blessing to be asked to go!  We wouldn't have gone on our own without someone inviting us to go with them.  Once Sue told us the face value of the tickets were $250 and that they had seen tickets were being scalped on ebay for $2500 I knew this was an opportunity we would not have had except for God's favor and blessing.  I'm afraid I would have been tempted to scalp the tickets if they had been mine, and then I would have missed an experience that was priceless because so many memories were created.
It's a good thing the Lord plans surprises for me that I have no way of changing, otherwise I would miss many blessings.
at 2:34:00 PM