Report on the Community MAPPING Meeting

What a great meeting we had last night!  If you weren't able to attend, I'm sorry you missed it!
The information presented during the business part of the meeting was very informative and inspirational.  Martinsville IS on the Move.  An added bonus was the introduction of Hannah, our new Peace Corp Fellow, who will be working full-time for 11 months beginning in September to help Martinsville grow.

Kent announced and explained the Linn Foundation which has been established to benefit Martinsville.  The Foundation has been funded with almost a million dollars.  The interest on that money will be disbursed each year to 501(c)3 organizations in the community.  We expect that will amount to around $30,000 to $50,000 to be spent yearly to improve the community.  Other people are also invited to contribute to the Foundation to help it grow.
There were approximately 120 attending the meeting and 27 of them signed up as new volunteers to work on the Action Teams.  How encouraging--especially since over 50 others went through the MAPPING process and are already on Teams! 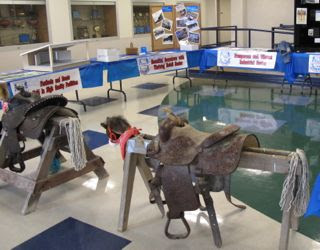 Since the theme was "Saddle Up for the Future of Martinsville," Linda used saw horses with stick horse heads and yarn tales to hold western saddles. 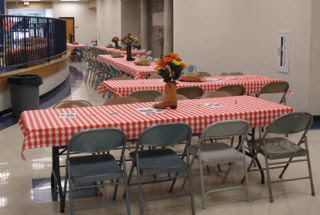 The tables for the dinner afterward were decorated in red and white checked cloths with centerpieces made from old boots filled with corn to stabilize them so they could hold a bouquet of colorful silk flowers.
Straw bales draped with bandanas were placed strategically in case someone needed to "sit a spell".      The barbecue prepared by Mike & Cindy was delicious.   Even the country themed music playing before the meeting and during the meal added to the festivities. I heard many wonderful comments on various aspects of the meeting so I know those who attended enjoyed it as much as I did.  It was a very pleasant and productive evening! (Sorry, I have no idea why the big space appears above. I have done everything I can think of to remove it! This is SO frustrating!)
at 10:43:00 AM