Attached is part of an email letter from Lou Engle which was sent to those who have supported The Call in any way.  (I highlighted the paragraph that was most encouraging.)
Country Guy & I were part of the amazing Call in Nashville so I found his letter especially interesting and hopeful.  I searched my photos to find these I had taken at The Call Nashville on 7-07-07.  It's a memory I'm glad to revisit.  What an incredible experience to be among 70,000 people worshipping and praying for revival in America!  Lou Engle has done more than anyone I know to bring about sustained prayer in this land. 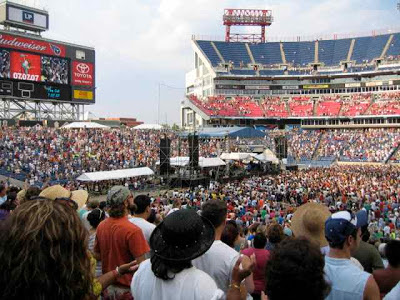 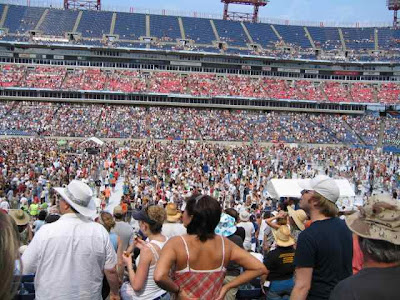 There are moments in history when a door for massive change opens. Great revolutions for good or for evil occur in the vacuum created in these openings.  It is in these times that key men and women, and even entire generations, risk everything to become the hinge of history-  the pivotal point that determines which way the door will swing.  – Nazirite DNA, Lou Engle

Twelve years ago, God opened a great door for a prayer revolution in America. That revolution, among other movements, was TheCall.  Hundreds of thousands of men and women have gathered together in fields, stadiums, and arenas, to fast and pray, and have carried the flame wherever they have returned.  2012 was the 12th year of this movement.

Now, many look at the state of the nation and are deeply discouraged, but I am filled with hope.  I have read history; most great moves of God erupted in the darkest times of crisis and were preceded by years of intercession.  Today, I have more expectation for the Great Awakening in America then I ever have had.  God will respond to 12 years of the sacrifice of prayer that has gone forth out of TheCall!

In 2002 after a 40-day fast, I was given a word that wherever TheCall goes, I will establish my House of Prayer.  Today prayer furnaces and prayer ministries have been spawned from TheCall, and Houses of Prayer are springing up everywhere!

Friends, we are in a worldwide prayer revolution and by the grace of God, TheCall has been one of the catalysts that God has used to light that fire.  I am convinced that the labor of TheCall is not in vain…

Recently, I was viewing an incredible video of TheCall Nashville (7-7-07) where 70,000 people gathered to pray in Titan Stadium.  I was moved so deeply, even to tears.  I began to muse and inwardly groan in prayer, "God, has TheCall fulfilled its purpose?  What really happened at TheCall Nashville?  I know tens of thousands of lives have been changed at TheCall, what about the nation?"

Then two days later, a man I have never met came to me and said,  "Lou, I had a dream two nights ago (around the same time I was praying) and said,  "In this dream, Lou you came to me and asked me 'What happened at TheCall Nashville?' And I said to you, 'Lou, my life was mightily changed individually. " Then I Lou replied, "But oh much much more happened. It was all in the invisible. At TheCall Nashville, Heaven came a little closer to earth."

Surely this man was sent as an answer and confirmation to my prayer that 12 years of TheCall has brought Heaven closer to earth. . .
at 8:13:00 AM

17 If we are thrown into the blazing furnace, the God we serve is able to deliver us from it, and he will deliver us[c] from Your Majesty’s hand. 18 But even if he does not, we want you to know, Your Majesty, that we will not serve your gods or worship the image of gold you have set up.” Daniel 3:17-18