I'm excited about the new look of my cookbook!  The publishing company sent a PDF proof of the book yesterday for me to approve so it could be sent to the printer.  Here's the front cover of the Second Edition.  (Click here to see the original.)  They have estimated the ship date to be February 28, so I should have the new books by the end of the first week in March. 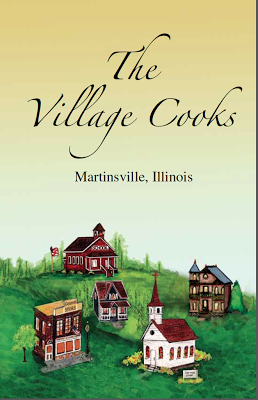 I mentioned in a post in January that my sister had asked me if I could re-publish my cookbook because she & her husband wanted to give several copies to co-workers and I only had a few of the original left.  But as we talked more about the process and expense, etc. they decided it might not fit their purposes.  Then the Festivals & Events committee decided it would be a great fundraiser for the festival we're planning this summer that will coincide with National Road Festivals in the U.S., since most of the work for the cookbook had already been done for the original.
As with most second editions, I have made some improvements to the first.  In addition to correcting the few typos I found in the original, I have given it a new cover and name, which better represents the goals & content of this project.  I have also added more than 50 new favorite recipes from family and friends.  The format of the book remains the same.  It is still my personal cookbook, so I have left the original comments which were included with each recipe of where and how I obtained them and why they are my favorites.  I also added comments to the new recipes--many from friends' grandmothers and other relatives which have been in their family for generations.  Because several people mentioned they would like a list of my most favorite recipes when I gave them the first book, I have placed an asterisk next to the title of my all-time favorite (or frequently used) recipes in this one.  I am excited about this new edition.  Because of the changes and the additional recipes, I believe that many who received the first one will also want a copy of this one, too.
As I was telling a friend recently, there are several recipes in this book for which I would pay $10/recipe because I love them and use them so much, and the included, "How To" section and the "Cooking & Nutritional Tips"insert make this a great cookbook to give to new brides and those who are just learning to cook.
Our committee is offering the cookbook for a donation to the Linn Foundation of $10, or more.  You can reserve your copy(s) right away by emailing me.  They will also be available several places in our community once they arrive, including at Accents, and at Mustard Seeds, in downtown Martinsville.  We will be grateful for all contributions, and we believe you will be blessed by this cookbook.