Mike & Cindy (from Illinois) arrived late Friday night so we all decided to go to the Native American Festival in Sarasota Saturday morning.  We stopped for breakfast at The Breakfast House (see earlier post), which was on the way to the festival, for a delicious, hearty breakfast.  The festival was educational and entertaining.  The costumes were beautiful!  The hoop dancer, Kevin Locke, was amazing.  At the time we watched him he worked with 28 hoops.  As he was dancing he explained the meaning of the hoops as a type of prayer.  He said he works with as many as 65 hoops at one time and that he had brought 100 which he would attempt to incorporate in a dance later in the day.  Here is a link to a YouTube video, if you would like to see him dance:  http://www.youtube.com/watch?v=YqNRLIH4vZk
One of the booth owners told us they have pow-wows all over the U.S. and that Illinois alone has over 50.  He mentioned that one in Tipton, Indiana, on the first weekend in September, has over 500 dancers and is one of the best shows we could ever see.
After the Festival we took Mike & Cindy to the Dry Dock restaurant for lunch and then spent the afternoon at the beach.  We were amazed at this phenomena--a halo around the sun--that appeared during the afternoon as we sat on the deck. 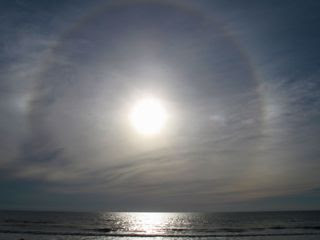 The sunset was the most spectacular we have seen since we've been here--a beautiful gift to us all!   It is interesting to see people gather to watch the sunset at the condos--a very social occasion! 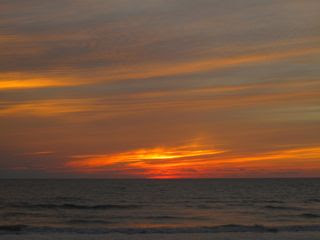 After watching the sunset we went to The Beach House for dinner and to enjoy the live entertainment.  John Rinell has a beautiful voice and sounds just like the original artists of the songs he sings--particularly Frank Sinatra.  Even though it was a little cool, the restaurant had propane heaters so we were able to eat outside which always makes me feel like I'm on vacation.  It was a wonderful day!
Then yesterday we went for a long walk on the beach and then to St. Amand's Circle to have lunch at the Cuban restaurant, Columbia.  We then strolled through the Art Show that was set up there.
On the way home we stopped at Publix--the local grocery store--for salad fixings for dinner so that we wouldn't have to go out again.  What a relaxing afternoon and evening spent at the condo!
Our friends left this morning.  As our time on the beach is winding down my thoughts are beginning to turn to home.  It will be good to be home, but I'm a little reluctant to leave this beautiful area and the wonderful weather we have been having.
at 7:51:00 AM