A Different Tree Than I Had Imagined

We have our Christmas tree up.  It is beautiful, we think, and entirely different than we've ever had.  For one thing--it is artificial.  We always put up a real tree.  See last year's tree post http://www.shalominthewilderness.com/2011/11/thanksgiving.html for a comparison.   This year I had planned to do the same but one thing led to another...
Since our ceiling is so high in the living room, I love getting the tallest tree I can find each year.  This year, though, 10 feet seemed to be the tallest, and then our daughter called to say they would be coming after New Year's instead of at Christmas.  Since I usually take the tree down right after Christmas, I just couldn't get excited about putting up a tree that wasn't as tall as I wanted and that wouldn't be enjoyed by many people.
I then decided I would set the small artificial tree (already decorated) that I usually use in the window over the entryway on a table and call the house 'ready for Christmas'.  I couldn't seem to resist getting out some of the decorations I enjoy, though.   As I began to arrange them I seemed inclined to use the silver and white things and frosted garland on the mantle over the fireplace in the living room.  That looked so pretty!  But then the little red & gold decorated artificial tree looked so out of place and the plant shelf over the entry looked so bare!  I decided I might as well put the little tree in its usual place and find something else for the living room.
Country Guy and I decided to go shopping--on Black Friday no less--to see if we could find a 7 or 8 foot artificial tree that we could decorate with silver, sparkles, and glass this year and then use it in the basement in coming years.  We found a beautiful 7 foot pre-lit tree at Menard's, called Arctic Frost, which looks very real and was the most reasonably priced of any we looked at, so we were excited!
Sydney & Owen spent the night Saturday.  We had a great time decorating the tree and we're thrilled at how beautiful it turned out. 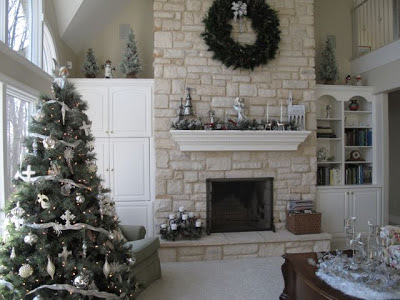 I'm including a photo (which doesn't do the tree justice) so you can get an idea of what I'm talking about.  I guess I should have taken the picture before the sun shone through the window but then I wasn't thinking about writing about it last night!
at 7:43:00 AM