Aren't you outraged at the media and politicians like Al Sharpton, Jesse Jackson and Barrack Obama constantly stirring up racial strife--like what they've done with the Trayvon Martin case? (And what they have recently done to the rodeo clown who was dressed as Obama.  How many people were sent to 'sensitivity training' for ridiculing George Bush?  But that's another story, isn't it?)
I read recently there have been over 10,000 black on black murders since George Zimmerman defended himself against that thug, but there is no mention of that in the media.  Instead they have tried to portray George as a white person who was racially motivated. They have ruined his life for their own political gain.  I pray there will be no gain but instead that people will wake up to the fact they are being manipulated by those who believe they can.  If you read anything about George Zimmerman's background you will see he was not a racist but instead had many black friends and acquaintances.

Once in a while, a cartoon comes around that absolutely hits the nail on the head. 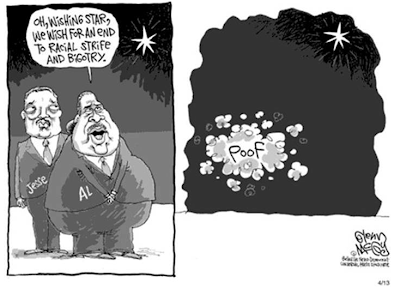