What a wonderful trip my friend, Jan, and I had!  The conference in Redding, California was amazing! The teaching was excellent and we saw incredible healings, including one woman who had neurological problems associated with Lyme Disease which she had been battling for 34 years; another woman healed of MS; one woman's crooked foot straightened alleviating pain which had incapacitated her for several years (She had pictures on her cell phone of her crooked foot before it straightened.)
Over 200 people per night stood to testify they were at least 80% better after prayer for healing.  God is on the move!

Several of the following photos were taken with my phone through the car window so the quality isn't as good as I like, but they illustrate the point. 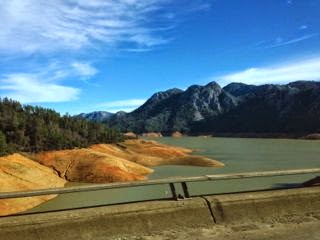 When the conference was over we drove to Newport, Oregon where we stayed at the Sylvia Beach Hotel on Nye Beach for 2 nights.  This quaint hotel was very fun!  Each room is decorated for a particular author.  I stayed in the Lincoln Steffans (an author I had not heard of).  Jan stayed in the Shakespeare room the first night and then moved to the Alice Walker room for the second one.  We were blessed that the hotel had 2 rooms available when we arrived.  It is actually a Bed & Breakfast so we had 2 wonderful breakfasts there.  We also ate dinner at the hotel on Sunday night because we had heard it would be excellent.  It was. The food is served family style.  There were 8 at our table.  It was suggested we play Two Truths and a Lie while waiting for our food between courses.  What fun!
It was like being on a Rick Steves' Tour--a clunky old hotel with much character--friendly, family-owned with no elevator or porter to carry your bags up the stairs but the opportunity to connect with the culture and to dine with others so you could get to know fellow travelers.


I can't remember which room was whose on some of the photos--one was Hemingway's I know, but I added them anyway because I thought you might enjoy seeing the different decor. 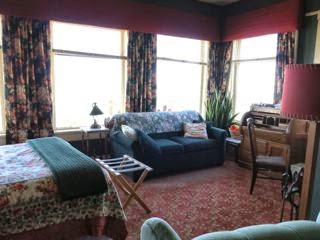 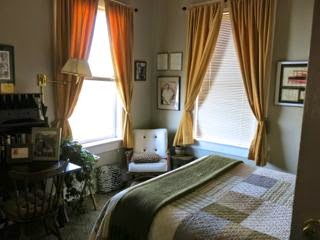