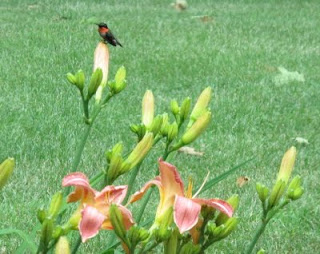 I am fascinated by hummingbirds, aren't you?  They are so tiny and fly so fast!  I saw this little guy perched on the daylillies as he was waiting his turn at the feeder.  The setting was so beautiful I couldn't resist snapping his picture.
Obviously there is a pecking order for hummingbirds because some will only feed if others are not nearby.  Even though there are 4 feeding stations at the feeder and only one was occupied, the bird on the daylillies didn't try to eat until this one left. 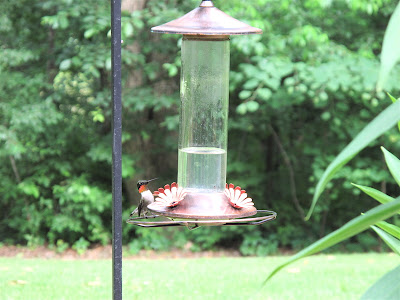 We have 3 or 4 who visit regularly which is just the right number for me because they startle me when I am tending the flowers as they buzz around feeding.  My mom probably has 30 or 40 that feed at her feeders most of the time.  If you're inside, they are fascinating to watch, but I don't enjoy that many buzzing me if I'm near the feeders.
Here are some interesting Hummingbird facts from a couple of articles I found on the internet.  I am trusting the facts are accurate because I haven't checked them out.
Fun Facts About Hummingbirds--combined from http://www.epinions.com/content_3171721348 and http://www.worldofhummingbirds.com/facts.php

1. There are seventeen species of hummingbirds in North America and they are the tiniest birds in the world.
2. Hummingbirds flap their wings 50 to 200 times per second. Generally the faster time is in courtship.
3. They can fly up, down, right, left, backwards, upside down and even loop-de-loops!
4. They have tiny little feet that are only good for perching, scratching or preening. This means if they wish to move, even a few inches, they must fly.
5.  When hummingbirds sleep at night, they go into a hibernation-like state called torpor.  Hummingbirds enter torpor to conserve energy.  When a hummingbird goes into torpor, their metabolic rate is onefifteenth (1/15) of normal sleep.
6. They eat every 10 minutes throughout the day.
7. A hummingbird can eat anywhere from half (1/2) to eight (8) times its body weight a day and will visit an average of 1,000 flowers per day for nectar.
8. Their main diet is sugar which they get from plant nectar or from kind-hearted people with feeders.
9. They also eat bugs for protein.
10. Hummingbirds have grooves on the sides of their tongues. This is to help catch insects.
11. Their tongues can take up to 13 licks a second.  A hummingbird will use its tongue to lap up nectar from flowers and feeders.   A hummingbird's tongue is grooved like the shape of a "W".   Hummingbirds have tiny hairs on the tip of the tongue to help lap up nectar.  A hummingbird's beak is generally shaped like any other bird beak, just longer in proportion to its body. Hummingbirds do not drink though their beaks like a straw. They lap up nectar with their tongues.
12.  A hummingbird's brain is 4.2% of its body weight, the largest proportion in the bird kingdom. They are very smart and they can remember every flower they have been to, and how long it will take a flower to refill.
13. Visual displays are how they communicate with each other.
14. These tiny little birds establish territories and will fight to keep others away. The males fight to keep a constant food source and the females to build a nest and feed her babies.
15. They use their bills and claws to fight but do not usually harm each other during a fight.
16. Hummingbirds will sometimes attack larger birds even hawks or crows!
17. Do hummingbirds sing? Not really, but they do chirp and make deep-throated guttural sounds.
18. They are sun worshipers and love to take sunbaths. They do this by facing the sun and fluffing out their feathers.
19. They take baths by using a cupped leaf, a birdbath, puddle or even sprinklers.
20. A hummingbird’s feathers are iridescent. Actually only a third of the feather is iridescent.
21. Hummers can fly up to 25-30 mph and  dive up to 60 miles per hour.
22. Their wings flutter in a figure 8 motion while flying.
23. They are only found on the American continent.
24. The Bee Hummingbird is the smallest bird in the world and only measure in at around 2 inches.
25. The Giant Hummingbird is the largest. Gee, that’s an original name.
26. A hummingbird called the Reddish Hermit weighs the same as a fly.
27. Early Spanish explorers called them Flying Jewels.
28. Hummers are the only bird that has an insect that will eat it. Praying mantis's think they are yummy!
29. Hummer’s average lifespan is 3-6years. The record is 12 years.
30. They lay two eggs that are about ½ inch long.
31. The eggs hatch in 13-22 days depending on the species.
32. Will hummers nest in bird houses? No.
33. They make their nests from plant fibers, plant down, moss and spider webs.
34. The nests are about the size of half a walnut shell.
35. With no feather the average hummer is about the size of a bumblebee.
36. Hummers migrate generally south for winter and north for summer.
37. Some hummingbirds migrate up to 2000 miles from their summer home in Canada to their winter home in Central America.
38. A few are only found in one or two states.
39. Why do we call them hummingbirds? They get this name from the sound their wings make when flying.
40. The iridescent feathers found at the throat of many hummers are called gorgets.