Sydney and Goatey won the "Most Unusual Pet" contest at the National Road Festival on Saturday.  Not only did they look really cute in their "Elevate 2011" t-shirts, but they also were walking advertisements for the concert coming up this Saturday.
Since Syd's parents had other obligations, it became a really fun day for us to take the two of them to the contest.  But it was even more fun for Sydney.  She was hoping the winning prize would be that she would get her picture in the newspaper.   Gary Strohm, who owns several newspapers, was there with his camera.  When he asked her name and address and learned of her desire, he said with a smile that he believed he could make that happen.  Therefore we are eagerly awaiting tomorrow's edition. 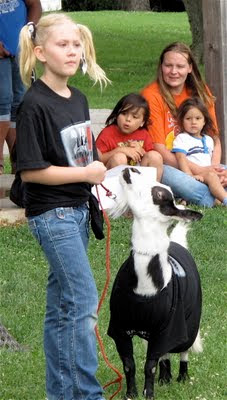 This is Granddad's favorite picture.  Goatey seems to be wondering what Syd has gotten her in to.  Isn't she an attentive pet?
at 7:37:00 PM

I love this photo, also.

This is so cute! Way to go Sydney!!! Was the picture in the paper this week?
Jess