Periodical Cicadas--or what we call "locusts"

This is a familiar site right now around our place.  The 13 year locusts have emerged from the ground!  Their shells are attached to tree trunks and branches and especially to the undersides of leaves. 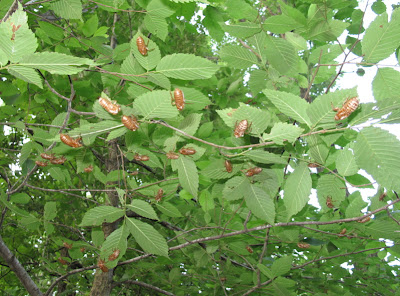 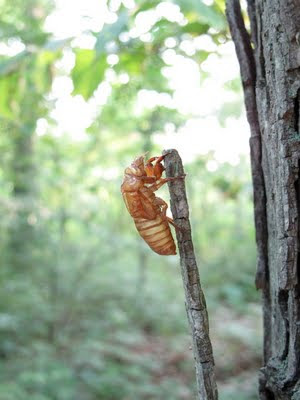 Every morning they begin their mating sounds until by late afternoon the sound reaches a crescendo that can be almost deafening.  One article I read said a group producing sound in unison can reach sound levels of 100 decibels!  Once the sun sets they become quiet until sunrise.  What a relief! 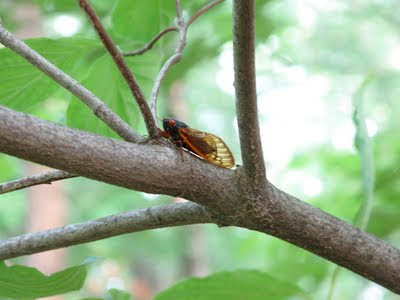 If you startle a bunch of them while walking near the leaves they're in, they may fly into your hair and onto your clothes.  Fortunately, they are harmless. 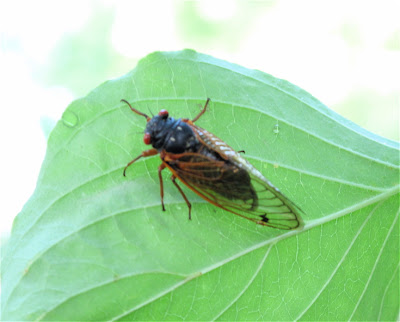 For those of you who would like a little more information here is a short excerpt from an article on Wikipedia about them:  "Nearly all cicadas spend multiple years growing underground as juveniles, before emerging above ground for a short adult stage of several weeks to a few months. The seven periodical cicada species are so named because, in any one location, all of the members of the population are developmentally synchronized—they emerge as adults all at once in the same year. This periodicity is especially amazing because their life cycles are so extremely long—13 or 17 years. Cicadas of all other species (perhaps 3000 worldwide) are not synchronized, so some adults mature each summer and emerge while the rest of the population continues to develop underground. Many people refer to these non-periodical species as annual cicadas since some are seen every summer. The life cycles of most annual species range from two to ten years, although some could be longer.

Periodical cicadas are average-sized for cicadas, but they are slightly smaller than the annual cicada species found in the same regions of the United States.   Imagos (or adults) have a size of 2.5 to 3 cm (1.0 to 1.2 in).    Periodical cicadas are black, with red eyes and yellow or orange stripes on the underside. The wings are translucent and have orange veins.
They are harmless insects; they neither bite nor sting. They are not venomous, and there is no evidence that they transmit diseases. They generally do not pose a threat to vegetation, but young plants may be damaged by excessive feeding or egg laying. It is thus advised not to plant new trees or shrubs just before an emergence of the periodical cicadas. Mature plants usually do not suffer lasting damage even from a mass emergence."
One of the articles I read said they will be gone by mid-July.  That will be a relief because the sound can get quite annoying if you don't ignore it. 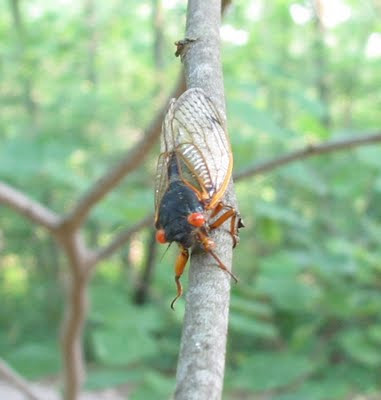 I am so impressed by God's creativity!  Who could imagine creating something so unique--that only gets above ground a few weeks every 13 or 17 years?
at 5:25:00 PM

Oh my! I can't believe how many were on that tree!