Last weekend Dale Gentry spoke at Elevate 2011 on Saturday night, and then at our church on Sunday morning.  He operates out of the belief that "just one word from the Lord can change your life forever."  He has a wonderful gift of giving prophetic words to people.
We first heard him and had the experience of him praying for us twenty-six years ago when we lived in NE.  The words he speaks over people are often words of how God sees them and he calls out the giftings God has placed in each person.  Someone wrote highlights of the word Dale gave me at that time and I still carry them in my Bible.
I had the privilege of transcribing the words Dale spoke over several who came for prayer in the Prayer Tent Saturday night.  I was totally amazed at the accuracy of the things he prayed for people!  The first person I encouraged to go for prayer even accused me of telling Dale things about her in advance.  Of course, I hadn't.  I purposefully kept from mentioning anything about anybody, including family members, because I wanted to see what came out in the prayer time.
On Sunday, right before Dale was to speak at our church, a young woman came up to him who he clearly recognized and was delighted to see.  When he got up to speak he introduced her and asked her to tell her story.  She said that several years ago she went to a meeting at her church when Dale was to speak.  He asked if he could pray for her and when she said yes he asked her name.  She said, "My name is Tanya."  He said, "No, your name is Dr. Tanya."  She continued with her story by telling us she had applied to medical schools but couldn't get accepted to any.  She had been very discouraged and ready to give up when Dale spoke that word to her.  It was what she needed to hear to help her persevere, and now she is "Dr. Tanya" having completed medical school and is working in Champaign while waiting to be accepted in a residency program.  It was a wonderful testimony and an example of how "just one word from the Lord can change your life forever."  She said she would have given up if God had not spoken to her through Dale that night and therefore she never would have realized her dream of becoming a doctor.
We invited her and the other 2 girls she brought with her, who also turned out to be doctors, to our house for lunch on their way back to Champaign.  I rode with them so they wouldn't get lost and on the way back we were discussing how amazed they were at Champaign being out in the cornfields.  I told them they would definitely feel 'out in the cornfields' when they got to our secluded place.  When I mentioned we have horses, they were amazed!  They said that on the way to the church they were discussing how they wished they knew someone with horses because Lincy had never been near a horse or ridden one, but thought they were so beautiful.  God had answered their prayer that very day!   By the time the afternoon was over Lincy had sat on a horse, and the three of them had experienced several other things they had never done before. 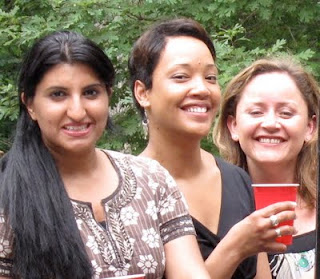 Sunday afternoon Country Guy and I adopted these three girls into our family.  They are all originally from different countries.  Lincy's parents are from India, Tanya's from Jamaica, and Patty's (Nydia's) are from Columbia.  They have no relatives close-by, so now they have a place to hang out and escape the pressures of their work to have some fun.
We are amazed at what the Lord has done and is doing.  Meeting them Sunday definitely was a Divine Appointment.  All three of them love Jesus and feel just as we do, that He has brought us together for a purpose.  How amazing is that! 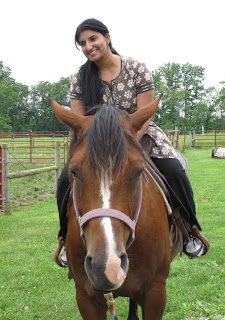 They will be here to celebrate the 4th with us, and will be bringing Patty's parents who are visiting her this month.  We are eager to meet them and to see what else transpires through, and for, our new family additions.  Walking with Jesus is exciting!