What a wonderful concert!


What a wonderful time we had Saturday night!  The weather tried to stop us, but we were determined!  It began to rain just as the concert was about to start, but we were assured by those in the know that it wouldn't last long.  Many came prepared with umbrellas which made a colorful picture as they popped up.

The rain slowed to a trickle so at a little after 4:00 Rebekah Dennis and her band were able to begin.  Even though this was their first time on a big stage they did an excellent job!  They were followed by 'the broken' who were also great!
Each band 'elevated' the Lord and the audience through their music and testimonies.  JJ Heller was a crowd favorite.  Her music touched many hearts and lives.  We are receiving testimonies of changed lives because of her testimony and songs.
Dale Gentry gave a good word about making your dream a reality by "hearing it, seeing it, saying it and doing it."
Gungor was a great surprise to many people who had never heard of them.  They are such talented musicians with a wonderfully inspiring message.
A huge storm threatened so Sanctus Real had to cut there performance a little short, but not before playing their favorites and giving some moving testimony. 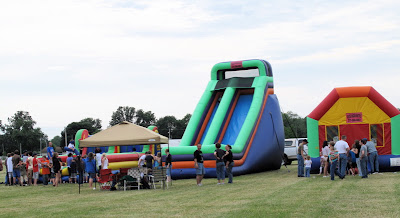 The kids loved the bouncy houses and the freedom to run and play in the grassy field.
As clean up began, so did the storm, but it wasn't able to stop a wonderful, glory-filled evening that honored the Lord Jesus.  I hope you were there, because if you weren't you missed a very special opportunity to praise the Lord in Martinsville, Illinois, with so many exceptionally talented musicians!