I've been missing blogging.  We returned last night from a trip to Nebraska, via Adventureland in Des Moines and the Henry Doorly Zoo in Omaha.  One of our grandchildren, Sydney, has asked me several times if she could go on vacation with us, and if we would take her to Nebraska when we went, so it seemed this was the perfect time.  Her brother, Owen, came, too.
Grandchildren are a wonderful excuse to do some things we wouldn't normally do--like ride roller-coasters and ferris wheels and water slides.  How blessed we are to have the opportunity to relive our childhood with them!  We had a really fun time at the amusement park.
Here is a view of the park from the top of the ferris wheel.  It is a beautiful, clean wooded park.  We had so much fun, we all want to go again.  (If you click on the picture it will enlarge.) 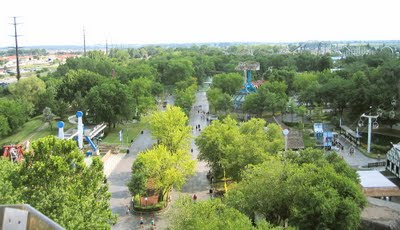 The next day we drove on to Omaha and met our daughter, Jess, and our youngest grandsons at the Zoo.  One of the reasons for going to Nebraska at this time was to attend the wedding reception of the daughter of dear friends, Jim & Mary.  When I told Mary we were coming and what our plans were, she said she would like to meet us at the Zoo, too, with two of her grandchildren.  What fun!
I encountered a small problem, though.  We arrived earlier than the other two groups and since we had been in the car for a couple of hours Sydney and Owen were eager to get started seeing the Zoo.  We decided to go to the Desert Dome first because it was near the entrance.  Jess called to say she would be there in a few minutes and would call when she arrived.  While we were in the Desert I received a voicemail from Mary saying they were now inside the Zoo.  Reception wasn't very good in the Desert so I assume her call went straight to my voicemail and therefore didn't register her number on my caller ID.  When I tried to call her back I realized I didn't have her cell number in my phone, only her house number.  I tried to call her house to see if anyone was home to give me her cell number, but no one answered.  I decided I would go back to the entrance since I knew Jess would be coming there soon and hopefully Mary would be near there, too.  As I arrived, I started to open my phone and as I did, it popped open in two pieces and fell to the ground.  Now what was I going to do?  To make matters worse, it turned out to be Member's Day at the Zoo so there was a huge crowd.  As I stood there, Jess and the boys came through the gate so I told them of my problem and that Kent and Syd and Owen were in the Desert.  She left me her phone so I could call Kent if need be, and headed over there.   I realized then that all I could do was to pray that Mary would find me.  And right then she walked out the door of the Wild Kingdom just as I looked in her direction.  Thank you Jesus!  I called Kent to tell him we were all coming through the Desert so to wait at the door when they finished.  Finally we all got together!  For awhile I was afraid that wouldn't happen.  It was 100 degrees, so all but Country Guy, Syd, and Owen left around 2:00.  They stayed until around 4:00 and then drove on to Jess' house.
Thursday morning we went to the Verizon store and bought new IPhones.  We had been considering them for several months.  Hopefully they will work fine at our house.  When we first moved here I tried Verizon and had to turn in my phone because I had no reception in the woods.  We have been told new towers are now in place to fix that.
We spent the rest of our trip at our daughter and son-in-law's house, but took side trips to Elephant Hall in Lincoln where they have the largest mammoth bones ever found, the Children's Museum, and the swimming pool.  The kids all had a wonderful time.
The wedding reception Friday night was very nice.  It was so good to celebrate with our friends and  to see how happy Maureen & Jeff seemed together.
Since the flooding of the Missouri River prohibits crossing it at Nebraska City, we decided to return via Omaha and show the kids where their dad grew up and went to school, and where Granddad worked when we lived there.  They were surprised the school was still standing since their dad is so old!  I love hearing children's perspectives on things, don't you?
On the way home, Owen said, "I miss Gavin & Gage," so I guess it was a successful trip all around.
at 12:33:00 PM