What a fun week/weekend!

I picked Jan and her mom up at the Indy airport on Wednesday.  Jan, who lives in Portland, OR, and I have been friends since first grade. We hadn't seen each other for 4 years so we get to have a lot of time together for "catching up" since she is staying with me and her mom is staying with her friend, AnnaDee.  She will be at our house off and on till the 15th.
We went to the Martinsville Ag Fair on Thursday to see some of our grandchildren in the animal scrambles.  None of them caught an animal, but they tried and they had fun anticipating the event.  The emcee announced there were 1100 entries in the various events, so you can see how popular the scramble is.
It was fun to see lots of others we hadn't seen in years as we walked down the Midway and sampled Fair food. 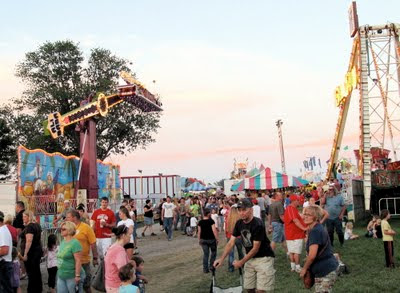 The crowds were huge this year! One reason was the free carnival rides with a $5 admission. There has been a great increase in attendance since the fair board introduced that idea. Someone was telling me they talked with people from Peoria, Champaign, and near Indianapolis, who had heard about this great deal and had brought their children for a fun night of carnival rides. 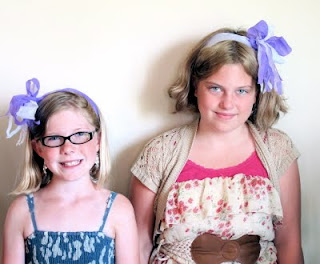 Saturday I went to a bridal shower for one of my nieces.  Our granddaughter, Josie, (right) and Kalie, decorated their hair to match the shower decor.  Many of you prayed for Kalie a few weeks ago when I posted a request for her on the "Prayer Request" page because she was in the hospital and very ill.  She's doing great and has gained 7 pounds!  Thanks so much for your prayers.
I was asked to bring the punch for the shower, and since I discovered an excellent recipe I posted it under "Miscellaneous" on the "Recipes" page, if you're interested.  It would be a great refreshing drink all summer. 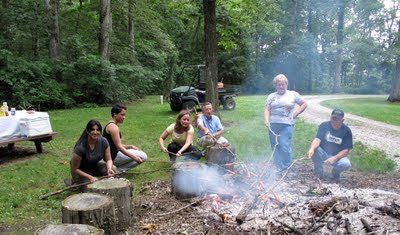 On Sunday, our newly adopted girls (see last week's post) came with Patty's parents to spend the 4th with us.  We had a wiener roast Sunday night.  I was amazed because the thought had occurred to me earlier in the week that the girls might enjoy a campfire, so I had planned accordingly.  When they came they also were amazed because Lincy had said on the way here, "I wish we could have a bonfire."  She was the one last week who said she wished they knew someone who had horses right before we all met each other at church.  Then when I told her I had made cheesecake brownies for dessert yesterday, she was thrilled because she said brownie cheesecake is her favorite!  I told her I thought God was answering her desires to show her how close He is and how much He loves her because she will be going to Las Vegas in a couple of weeks, where she knows no one, to do a year of rotations to complete her medical degree at one of the hospitals there.  I think God is reminding her that she can call on Him for anything she needs, don't you?
Then yesterday was filled with horseback riding, Mule driving, 4-wheeler riding, fishing, target practice, and lots of eating!  Our oldest son's family came, minus Parker, who was canoeing with friends.  Also, Mom, and friends, Mike & Cindy, in addition to 5 of the house guests  (Jan had another picnic to attend) were all here to help us celebrate the 4th. 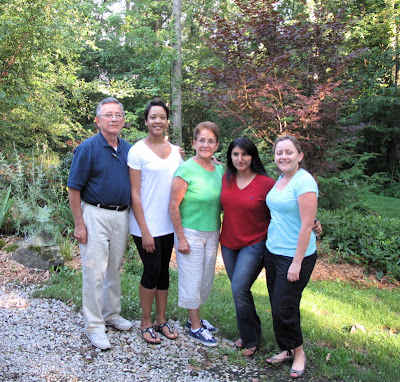 It was nearly 7:00 when we said good-by to the girls and to our new friends, Jaime and Disney Caro.  Country Guy and I were so tired we ended the day in our pajamas watching a movie.  What a fun weekend!
at 9:48:00 AM