Varmints I would like to see vanquished from our property

I am feeling rather irritated at the varmints that come to our bird feeders at night. Often there are possums feeding under them which don't seem to create a problem even though they are nasty creatures.  (I tell myself they can't help it.  God created them that way). 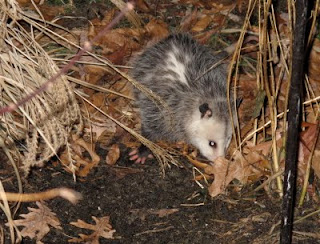 But the raccoons are being such a nuisance!  They have discovered how to unscrew the bottom of our hummingbird feeder to get to the nectar.  The past two mornings I have found the feeder still hanging from the pole and the bottom parts strewn about on the ground.  It seems as if the animals would be such a mess afterwards!  I can't imagine they actually got to drink any of the nectar but were probably drenched with it instead.
The coons are also able to climb past the squirrel baffle on the regular bird feeder pole, open the lid and feast on sunflower seeds so that there are none left by morning.  Then they try to jump up to the finch feeders and in the process flatten the hosta that grows under them.
They have been digging through the mulch on my flower gardens that looked so pretty before they arrived.  I suppose they are looking for grubs and earthworms.  As they do this they leave big holes and dirt on top of the mulch.  See the picture below.  They also dig through my flower pots and in the process pull out plants and spread soil all over the deck.  How irritating and what a mess! 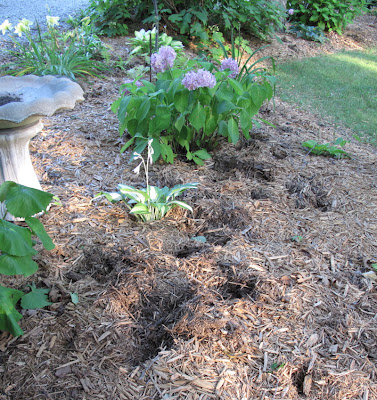 The last reason why I would like to see these varmints vanquished happened this afternoon.  When I went to the mailbox I stopped by the orchard to check on the blackberries and the peaches which were almost ripe.  The raccoons have eaten every peach off the trees except for the white peaches which ripen later!  The ground is covered with peach pits!  And they have eaten all but about a cup of the blackberries!  What annoying animals!
If you have ever thought raccoons were cute, come and live with me in the country, or better yet, I will send you a few of ours to live in your yard for awhile.   :o)
at 8:08:00 PM

We've been having the same problems. They have even been taking the tomatoes off the vines before they have a chance to rippen and leave them laying around the yard! Argh!

Our little fruit trees were loaded one day and literally bare the next. Ahhh!!

We recently trapped 11 coons in our machine shed that were knocking over things and leaving terrible messes everywhere. Those that were captured were used as training material for the coon dog puppies! Ah, the circle of life! :)