Discipleship: What Sheep Can Teach Us

This is an article written by Lois Tverberg from the excellent website, Our Rabbi Jesus, which has much information on the Jewish roots of the Christian faith and how many of the terms and illustrations in the Bible were interprested by the Eastern mind.  I highly recommend it.  I am particularly fond of Ray VanderLaan's website, Follow The Rabbi.   Ray has excellent teaching materials, including videos, articles, photos, and other information in which he teaches us to see the Bible in an entirely different light through the eyes of Easterners.  There is a wealth of information contained on this site.
Here is an example of articles found on Lois Tverberg's site:


Discipleship: What Sheep Can Teach Us
by Lois Tverberg 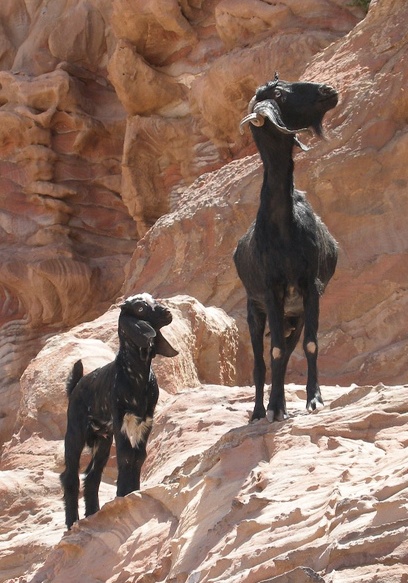 I used to think that Jesus’ command to make disciples simply meant teaching people certain beliefs about God, helping them to accept Christ as Lord, and then educating them in doctrinal truth later on.
Though all these are important, this way of defining discipleship showed that I, like many westerners, approached the gospel primarily as information. Unfortunately, such an approach tends to produce efforts at evangelism that are thinly disguised power grabs. We try hard to foist our belief system onto others, debating with people until they declare our way the best.
An eastern view of discipleship seems far more in keeping with the gospel. The eastern view encompasses the understanding that Jesus died for our sins and that belonging to him involves repenting and receiving him as Lord. But it also recognizes that Jesus lived transparently in front of his disciples in order to teach them how to live. They, in turn, were to live transparently before others, humbly teaching them the way of Christ.
This approach involves not just information but transformation. God’s goal isn’t to simply fill the world with people who believe the right things. It is to fill the world with people who shine with the brilliance of Christ.
Shepherding in Israel is a wonderful metaphor for of this kind of discipleship. In many countries, sheep spend their lives in fenced-in pastures where they spend most of their time grazing and milling about. Many Christians seem to think that the great commission is a matter of getting sheep “into the pen” —inviting people to accept Christ, the high point of their spiritual lives.
In Israel, however, where grass has difficulty growing in the arid soil, sheep must know their shepherd, following him obediently from pasture to pasture. There, shepherding is a much more active task.
Judith Fain is a Ph.D. candidate at the University of Durham. As part of her studies, she spends several months each year in Israel. One day while walking on a road near Bethlehem, Judith watched as three shepherds converged with their separate flocks of sheep. The three men hailed each other and then stopped to talk. While they were conversing, their sheep intermingled, melting into one big flock.
Wondering how the three shepherds would ever be able to identify their own sheep, Judith waited until the men were ready to say their goodbyes. She watched, fascinated, as each of the shepherds called out to his sheep. At the sound of their shepherd’s voice, like magic, the sheep separated again into three flocks. Apparently some things in Israel haven’t changed for thousands of years. 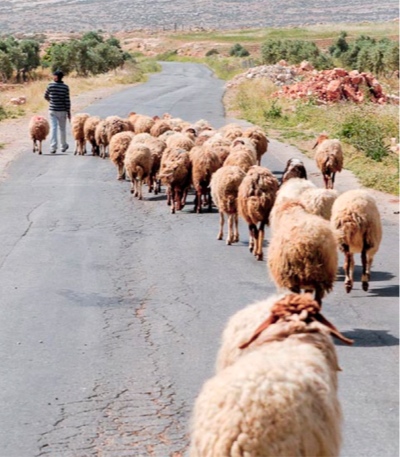 Just like these sheep, what distinguishes us is not so much the “pen” we inhabit, but the shepherd we follow. Some sheep come running as soon as their shepherd calls, but some struggle to obey his lead, going astray whenever temptation strikes. It takes a lot more energy to follow a wandering shepherd than to be cooped up in a pen!
But we are called to be disciples of a Rabbi who is always on the move, one who wants us to go with him, making disciples to the ends of the earth. We need to learn how to recognize his voice, to go where he wants us to go, and to serve and imitate him so that we can share his good news with the world.

(An excerpt from Sitting at the Feet of Rabbi Jesus, which is continued on the ORJ website.)
at 9:23:00 AM