A German's View of Islam 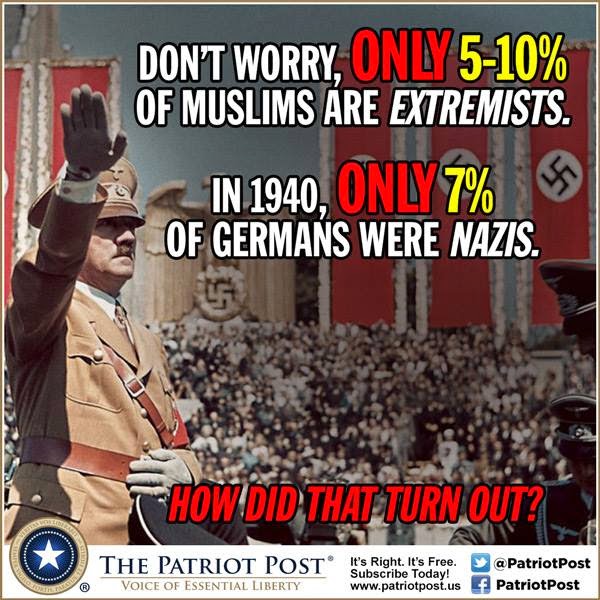 This email which I received recently is a wake up call to what is happening today.

A GERMAN'S VIEW OF ISLAM

This is by far the best explanation of the Muslim terrorist situation I have ever read.The author's references to past history are accurate and clear. It's not a lengthy read, it's easy to understand, and it's well worth the read.

The author of this email is Dr.Emanuel Tanya, a well-known and well-respected psychiatrist.

A man, whose family was German aristocracy prior to World War II, owned a number of large industries and estates.

When he was asked how many German people were true Nazis, the answer he gave can guide our attitude toward fanaticism.

'Very few people were true Nazis,' he said, 'but many enjoyed the return of German pride, and many more were too busy to care. I was one of those who just thought the Nazis were a bunch of fools. So, the majority just sat back and let it all happen. Then, before we knew it, they owned us, and we had lost control, and the end of the world had come.

My family lost everything. I ended up in a concentration camp and the Allies destroyed my factories.'

We are told again and again by 'experts' and 'talking heads' that Islam is the religion of peace and that the vast majority of Muslims just want to live in peace. Although this unqualified assertion may be true, it is entirely irrelevant. It is meaningless fluff, meant to make us feel better, and meant to somehow diminish the spectre of fanatics rampaging across the globe in the name of Islam.

The fact is that the fanatics rule Islam at this moment in history.

It is the fanatics who march.

It is the fanatics who zealously spread the stoning and hanging of rape victims and homosexuals.

It is the fanatics who teach their young to kill and to become suicide bombers.
The hard, quantifiable fact is that the peaceful majority, the 'silent majority,' is cowed and extraneous.

Communist Russia was comprised of Russians who just wanted to live in peace, yet the Russian Communists were responsible for the murder of about 20 million people. The peaceful majority were irrelevant.

And who can forget Rwanda , which collapsed into butchery. Could it not be said that the majority of Rwandans were 'peace loving'?

History lessons are often incredibly simple and blunt, yet for all our powers of reason, we often miss the most basic and uncomplicated of points: Peace-loving Muslims have been made irrelevant by their silence.

Peace-loving Muslims will become our enemy if they don't speak up, because like my friend from Germany , they will awaken one day and find that the fanatics own them, and the end of their world will have begun.

Peace-loving Germans, Japanese, Chinese, Russians, Rwandans, Serbs, Afghans, Iraqis, Palestinians, Somalis, Nigerians, Algerians, and many others have died because the peaceful majority did not speak up until it was too late..

Now Islamic prayers have been introduced into Toronto and other public schools in Ontario , and, yes, in Ottawa too, while the Lord's Prayer was removed (due to being so offensive?). The Islamic way may be peaceful for the time being in our country until the fanatics move in.

In Australia , and indeed in many countries around the world, many of the most commonly-consumed food items have the halal emblem on them.

Just look at the back of some of the most popular chocolate bars, and at other food items in your local supermarket.

Food on aircraft have the halal emblem, just to appease the privileged minority who are now rapidly expanding within the nation’s' shores.

As for us who watch it all unfold, we must pay attention to the only group that counts - the fanatics who threaten our way of life.Lastly, anyone who doubts that the issue is serious and just deletes this postl without sending it on, is contributing to the passivity that allows the problems to expand. So, extend yourself a bit and send this on and on and on! Let us hope that thousands, world-wide, read this and think about it, and they also continue to send it on - before it's too late.