A couple of weeks ago Country Guy and our oldest son went to Nebraska to pick up two additional horses from a feedlot out there.  I have been trying to get a good picture of them, but they have been somewhat camera shy.  Also, it has been raining so much that I just haven't found a good time. 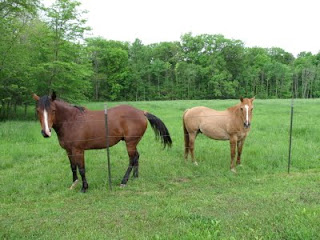 Here's the best I could do.  Their names are Mango and Dan. 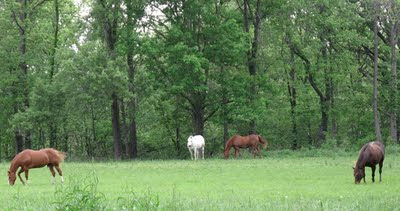 The horses in the picture to the right are our original horses.  Their names from left to right are, Jeremiah, Smoke, JoBee, who is now 33 years old, and Nick.

We've learned a little about horses' pecking order from watching them relate to one another.  Country Guy tried to put the new ones in with the other four, but Smoke--the gray mare--was determined she would no longer be at the bottom of the pecking order.  We were told that at the feed lot, Dan, the buckskin, was the dominant horse, but here he just ignores them all and lets Jeremiah and Nick, the two who have been dominate here, continue.   Smoke picked on, and aggravated the new ones till they had to be separated.  We have decided that seniority plays an important part in the pecking order.  The longer they have been here, the more seniority they have until they get too old--like JoBee--and then they move to the bottom.  Sounds a little like humans, doesn't it?
at 7:08:00 AM