The blogging website has been down so I have been unable to post until now.  They seemed to be doing some sort of maintenance. 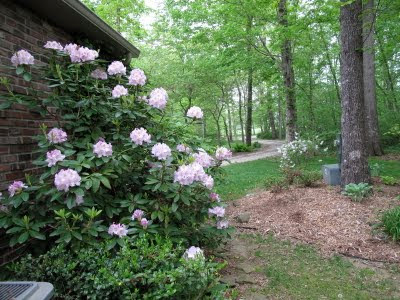 I thought you might enjoy seeing how beautiful the rhododendrons are right now. 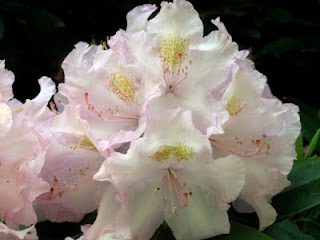 I always think the pink one is my favorite until I see the red one, and then I can't decide.  The red one really brightens up the front of the house 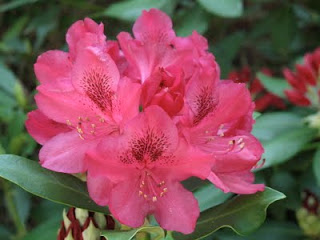 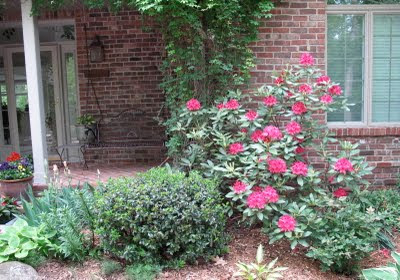 They seem to love growing near the foundation.  I tried planting them a couple of other places, but those pesky deer ate most of the leaves every winter.  So far they haven't bothered the ones planted near the house.
Speaking of pesky animals, yesterday I noticed a wren coming out of our bluebird house which I knew had a nest of baby chickadees in it.  I shooed it away, opened the door to the birdhouse and found 5 dead babies.  I looked on the internet and discovered that wrens regularly kill nestlings, or destroy the eggs, and take over the nesting boxes of bluebirds and chickadees.  I already knew they tried to establish their nests in bluebird houses because I have had an ongoing war the past couple of years with wrens, who insist on nesting in the bluebird house even though I have provided them with their own houses.  But I didn't know they would kill the babies of birds who were already using the nests.
Two or three years ago we had a pair of bluebirds nesting in the house, and so loved watching them!   But now every time they come near, the wrens chase them away.  I do not like wrens!

The rhododendrons are beautiful, we noticed when we left last week they were getting ready to bloom. We saw a bluebird several days in a row here also, then noticed a wren and haven't seen the bluebird since.