As I think about my favorite houseplants, I must admit I am so partial to ferns that if I had to slowly get rid of all my houseplants, the ferns would be the last to leave and the ones I would miss the most.  I love the graceful fronds of Boston ferns, but I also have a fern whose feathery fronds are even more beautiful than the Boston.  (I actually have two of these because I divided the first one.)  It was given to me by my friend, Michel, at least 20 years ago.  I only recently learned its' name when I saw several in a local nursery.  It is called a Whitmani fern.  The Whitmani has such a striking appearance that almost everyone who sees it comments on it's beauty and uniqueness.  These ferns seem to be rather rare since the only two I've ever seen are the ones I have and the ones in the nursery.
The top picture includes two of my Boston ferns.  These are in an east window.  The Whitmani, in the lower picture, is in a west window but since we live in the woods tall trees block most of the afternoon sun. 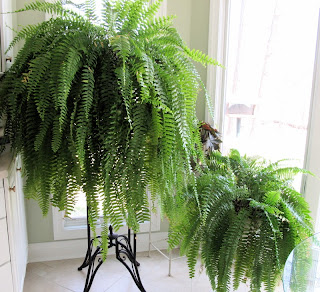 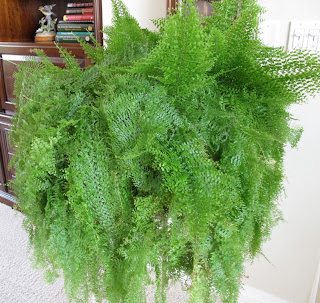 Ferns are relatively easy to care for if you give them plenty of light, but not direct sun.  They also seem to need more water than most of my plants, but don't like soggy soil.  They actually seem to enjoy an occasional drying out.
The one drawback to ferns is that they are rather messy, always dropping dead leaves if you don't keep after them.  I've found that if I give them a good shake so that all the dead leaves fall at once every time I vacuum it takes them about a week to accumulate again to the extent that they are constantly dropping.
I must say though, that the beauty they add to our surroundings far exceeds the little extra trouble they cause me with their messiness.  So if you're looking for a beautiful plant that packs a lot of interest I highly recommend a fern!
at 7:38:00 AM

I have one of the Whitmani fern that has been handed down.....Is there anywhere you know where to get these?? I am currently trying to save an 80 year old that is struggling