As I began thinking about what I wanted to say in this post I was reminded of a quote by one of my favorite authors, Glenn Clark, who founded Camps Farthest Out.  He used to say, "The answer resides in the question."  The question I was asking myself is, "What are my favorite houseplants and why?"  As I pondered this I realized the answer to that question is that my favorite houseplants are those that are easy to grow.  The reason people think I know how to grow houseplants well is because I find out what will grow (usually by trial and error) in a certain place and then I let it.  It isn't that I am good at growing things, I am just good at discovering what will grow in certain areas.  That is the key--to discover a plant that will grow in the conditions that I have--place it there, water it appropriately (see earlier post) and then let it grow.   That's the way I garden, too, by trial and error.  If something isn't growing well in a certain spot I move it and try to find something else that will grow there.
I think over the years I have had at least one of almost all the popular plants growing in my house at one time or another.  Some died, some didn't flourish, and some were just too much bother, so I threw them away, but not without a twinge of guilt. There were a few, though, that seemed to be very happy, so I replaced the rejects with more of the ones that flourished.  As I mentioned in an earlier post I have many plants in my house, but I have narrowed the species now living here down to only a few--keeping only those that are easy to grow and don't require too much time other than watering.
Of all the plants I have tried to grow, pothos is by far the easiest.  (If you're interested, I posted a link to more information on pothos on the Favorite Plants page.)  It is one of my favorites because it doesn't need much light and therefore will grow almost anywhere--except in the hot sun of a south window.  It will grow in soil or even in water.  I actually prefer to grow them in water because they don't get so 'leggy'.  Since they are so easy to grow I stick them anywhere I need a little greenery. 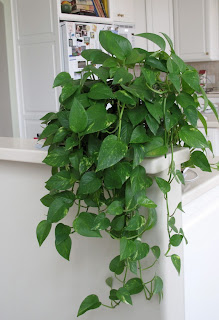 Whenever I need another plant, or I want to share one with friends, I cut off several stems from one of them, stick the stems in a jar of water, sit the jar in a basket and let it grow.   I have three of them in water on the bookshelves lining the hall to the garage.  There are no direct windows so the main light they get is from the canned lights in the hallway.  One of the three has been there--living in water--since we built our house.  Another one, also in water, is sitting on the divider to the kitchen.  Some of the potted ones are hanging off the plant shelf over the entry.  I am adding pictures so you can see what I'm talking about.
Since this post is getting rather lengthy, I will discuss some of my other favorites in a later post.
at 11:07:00 PM