Have you ever heard of the Bigleaf Magnolia tree (Magnolia macrophylla)?  I hadn't until last May when Mom & I toured a private botanical garden near Charleston (IL) that had several in bloom.  They are spectacular!  Their leaves can get up to 3 feet long, and their blooms can be nearly 1 foot across!
Of course my first reaction was, "I've got to have one in my garden!" And then I began a search to find one.  It seems they are rather difficult to come by.  By searching the internet I discovered a few nurseries in the south that carried them.  I called a couple of them to inquire about shipping.  They were very discouraging, saying the trees will not grow in our area and therefore wouldn't ship here.  I told them that I had pictures of one growing here.  They said it was not possible.  But I had proof they did grow here.  I had already seen them.  In fact the owner of the garden said many of the big-leaf magnolias growing on his property were planted by the birds.  He talked about how in attempting to grow them he discovered that in the natural they grow as understory trees on hillsides and higher places that drain well, but that also get a lot of moisture.   He said he had tried to get them started for several years, but had been assuming they liked moist soil so had not had any success until he discovered their preferred growing location.  I decided to continued my search.
One thing led to another, and I discovered that Randy Netzley of Netzley Nurseries in Riley, IN, had some to sell.  I called to be sure, and then made a trip over to his place.  What a treasure trove of native and unusual plants he has!  I now have 2 Bigleaf Magnolia trees growing.  Hopefully, they have survived our dry summer which was followed by a severe winter.  I will soon find out.  The daffodils are popping up so spring is near.  Randy had so many interesting and unusual plants that can't be found in our local nurseries.  He introduced me to the Winterthur Vibernum, of which I now have three!  I can hardly wait to get back to his place to find more 'gems' for my garden.  There is always room for another plant when you garden! 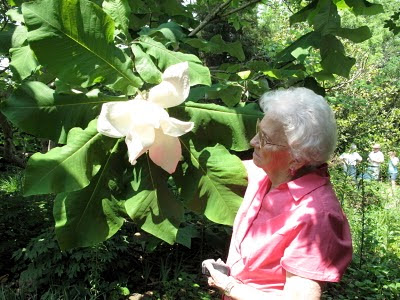 This is a picture I took of the Big-Leaf Magnolia when it was in bloom in Charleston.  And here is a site that has more pictures and information, if you want to learn more.           http://www.cas.vanderbilt.edu/bioimages/species/mama2.htm
at 6:41:00 PM

This is also why you pay taxes, for the authorities are God’s servants, who give their full time to governing. Give to everyone what you owe them: If you owe taxes, pay taxes; if revenue, then revenue; if respect, then respect; if honor, then honor.
Romans 13:6-7