I, too, am concerned about ebola but I believe politicians and the news media are stirring up fear to take our minds off ISIS, etc.  A couple of weeks ago ISIS & ISIL were all we ever heard about, then ebola came into the picture.  Now that's all we hear about.
I think we need to try to stay healthy by eating right, getting plenty of sleep, taking supplements, etc. and keep our eyes on the Lord.  I'm sure we would have much more peace of mind if we look to Him and spend our time talking with Him instead of worrying.
I thought this from The Patriot Post added a little perspective to the panic about ebola.   Below the photo I am posting some statistics I found on the flu & flu vaccine when I searched for how many deaths are attributed to it each year. 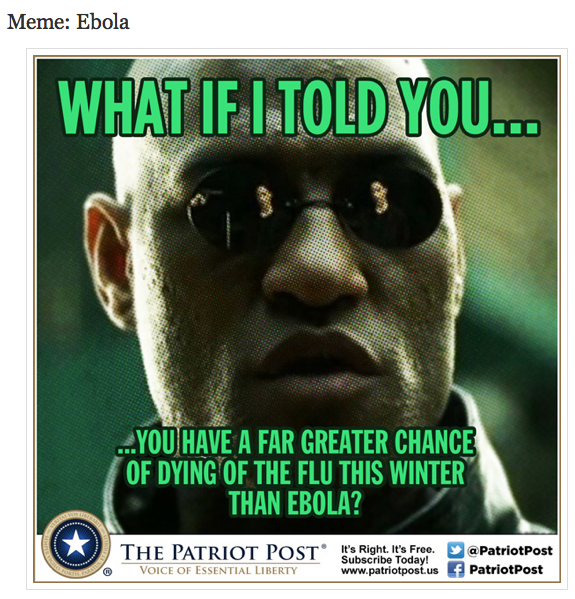 I am not a fan of flu shots. See this article which was written in 2005 to see how many strains are chosen to be included in flu vaccines.
The info below is from another website I came across.  It is interesting that 500 deaths were attributed to the flu vaccine last year.  You will notice at the end of the statistics they estimate the H1N1 flu shot saved 300 lives and prevented 1 million illnesses.  If these statistics are correct, it doesn't seem to be a very convincing reason to get a flu shot--500 deaths from complications to save 300 lives-especially since the chances of having the right strain included in the flu vaccine for that year is very slim, but that is just my opinion.
It seems to me we are not adequately informed about much of anything anymore--just fed a bunch of propaganda about specific things to feed panic and influence behavior.

Vaccination and Death Statistics
Vaccinations are recommended to receive in September when made available before the flu season starts in October and normally completes by May. The statistics and demographics of those that received the flu vaccination last year is outlined below.

The total number of mortalities suffered from the flu vaccine last year due to complications was 500 deaths.

It is estimated that over the last three decades, associated flu deaths in the United States ranged from a low 3,000 to a high of 49,000 mortalities total up to 2006.

The onset of the H1N1 virus outbreak in 2009 increased statistics of deaths associated with this strand of flu. The proportion of deaths attributed to this during the 2009-2010 epidemics is outlined below.

During this year of outbreak, approximately 20% of the population was vaccinated for the H1N1 virus. Fewer than a dozen cases of Guillain-Barre syndrome were reported post vaccination which provides a strong contrast to the last outbreak in 1976 that resulted in over 500 cases that killed 25 individuals.
Canada saw 24 confirmed cases of anaphylactic shock and one death related to administering H1N1 vaccine. However, 6 people of those had suffered the shock from the 157,000 doses in a single batch of vaccine.

It is estimated that the H1N1 vaccination saved approximately 300 lives and prevented an additional 1 million in illnesses.
at 5:14:00 PM

The Ebola infection has caused across the board fear. It has taken numerous losses in West Africa and if unchecked, it can spread to different regions. Read this article to know its causes, side effects and how to take preventive measures. I find a very good website for the Health Conditions, If you want you can visit this site.