We woke up to a beautiful 8 inches of snow on top of our already 4-5 yesterday.  There is no wind so the snow is stacked on tree branches, bird feeders and bushes. 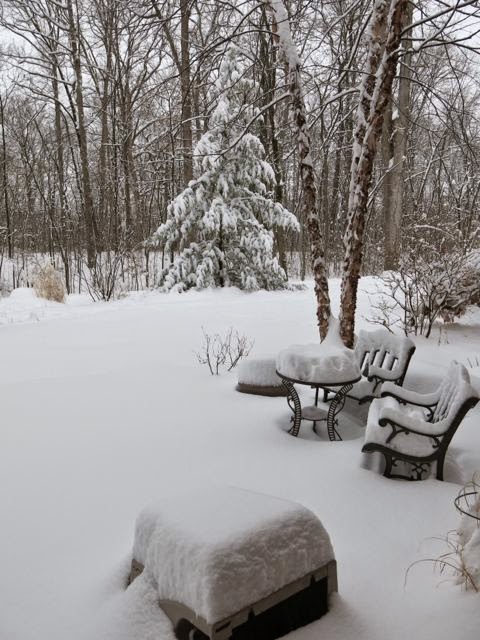 My dad was a farmer so the weather played a significant part in our lives and was much cause for anxiety in me as I was growing up because Dad would say how we needed rain, or we had too much, or the days were too chilly for corn to grow, or the sun was so hot on the already stressed crops they were going to die, or it looked like we could have an early frost which would kill the beans.  I always said I never wanted to marry a farmer and I didn't, but the Lord sneaked one in on me anyway.  My husband practiced law for 33 years.  When his father died in 1980 he also became overseer of the grain elevator and proceeded over the years to grow it into a sizable organization.  When he retired we moved back to Illinois where he continued to be involved with the elevator business and took over the farming operation.  So, you see, I am again very dependent on the weather.

I say all this so I can show you why the snow was not welcome--even if it is beautiful.  Two weeks ago on Saturday we had a terrific windstorm which rippped the tarp on the grain pile at the elevator and blew it completely off the west side. 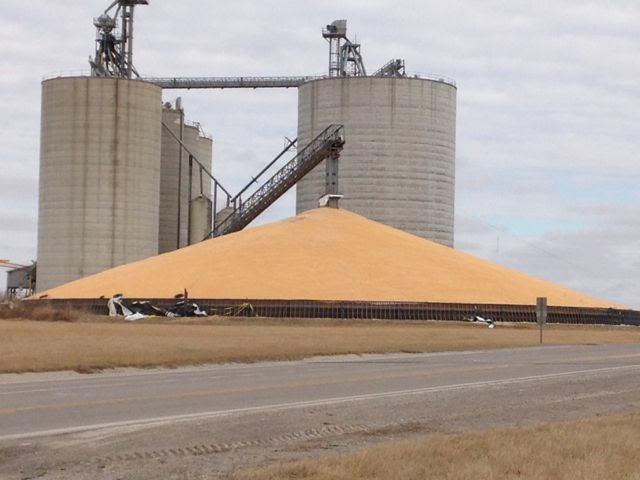 (When filling the pile the air tubes are laid in place and the tarp is placed over them before any grain is added.  The grain is never exposed to the elements as the tarp is lifted by the grain. Once it comes off there is no way to put it back on because it is so heavy.)

Even though it is preferable to wait till April to empty the pile there was no choice.  The guys removed the rest of the tarp, sold a couple of trains to move the grain, and thought it would work out fine since the forecast was for zero precipitation for several days.  (Because of the volume of grain in the pile it takes about 10 days to empty it.)  So much for weather forecasts!  That Sunday night it snowed 3 inches.  And then a couple of days later it snowed 2 or 3 more.  The temps were below zero a couple of nights following the snow and some days didn't get above 20 so the machinery for emptying the pile froze and then malfunctioned. The photo below is what the pile looked like last week. As you can see some of it has been emptied.  Since our lane has not been plowed, I haven't seen what it looks like today, but I'm sure it is not looking good.  And now there is an inch of rain forecast for tomorrow.  I'm sure you're getting the drift--pun intended--of my reasons for not enjoying the weather as much as I would like to. 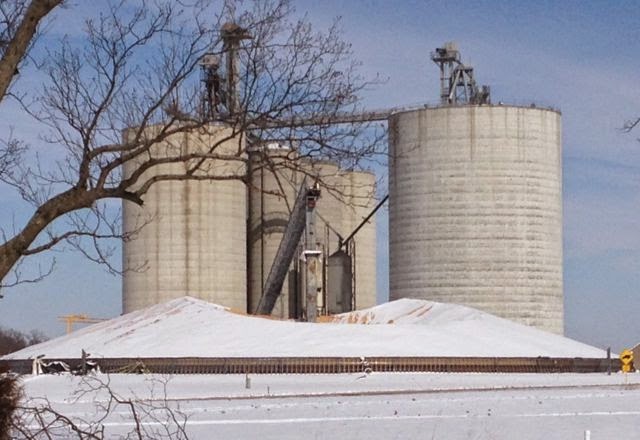