I was excited!  The floor of the new amphitheater was being poured and some of the excavation work was being done yesterday so I went to see if there were any questions or decisions to make.  On the way home I realized the Christmas lights we had used for the Hometown Christmas Celebration were still up at the park so I stopped to take them down.  Maybe if I had come straight home disaster could have been avoided.  Who knows?
When I got home--just as I was walking towards the kitchen I saw the shadow of a large animal on the deck.  I hurried out there and found a German Shepherd trying to get to the kittens in their house.  He had pulled the old towel that was on the floor of the house out onto the deck and had knocked the roof sideways.  I scared him off and then discovered two of the kittens were missing.  When I looked around I found them dead in the yard.  The dog had killed them.  As I watched, Milky Way (the kitten's mother) came walking out of the woods.  She discovered the first dead kitten on her way to the deck, licked it a couple of times and them picked it up by the neck and carried it into the woods.  She then seemed to be searching for the other one.  When I led her out to it she licked it a couple of times and went back to the 3 who had escaped the dog.  Later when I looked out onto the deck she was lying with them but had carried the dead kitten (from the woods) back onto the deck.  So sad! 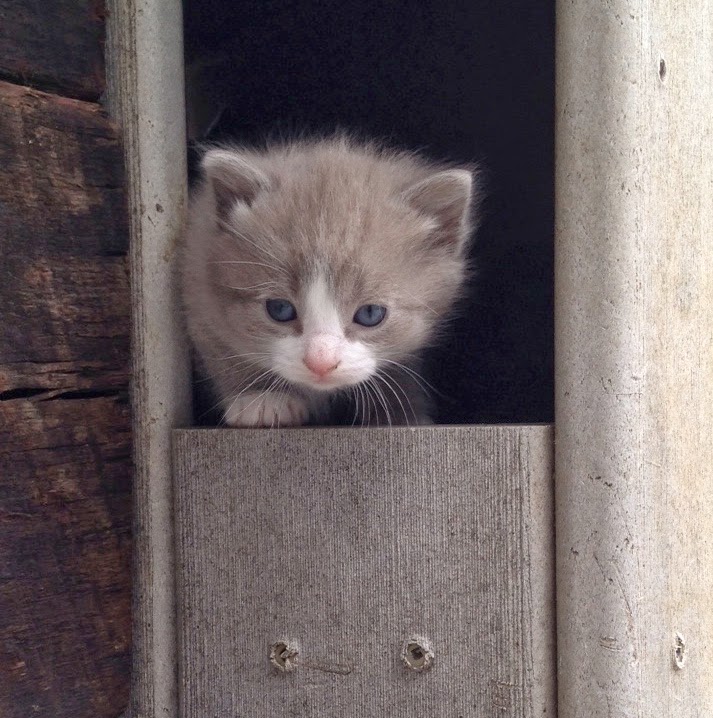 I am afraid the dog will be back today.  Since the kittens have gotten to the age of exploring the others will have no chance of surviving if he returns.  I don't know whose dog it is, but if I find out I will be contacting the owner.  Last week something ate 3 or 4 of Country Guy's chickens--the ones who wouldn't stay in the pen but insisted on flying over the fence.  We assumed it was a fox but now are wondering if it could have been this dog.
at 8:55:00 AM

So sad about the kittens. So sorry the boys, Gavin

and Gage have to know this. That dog needs to stay

on his owners property or else.